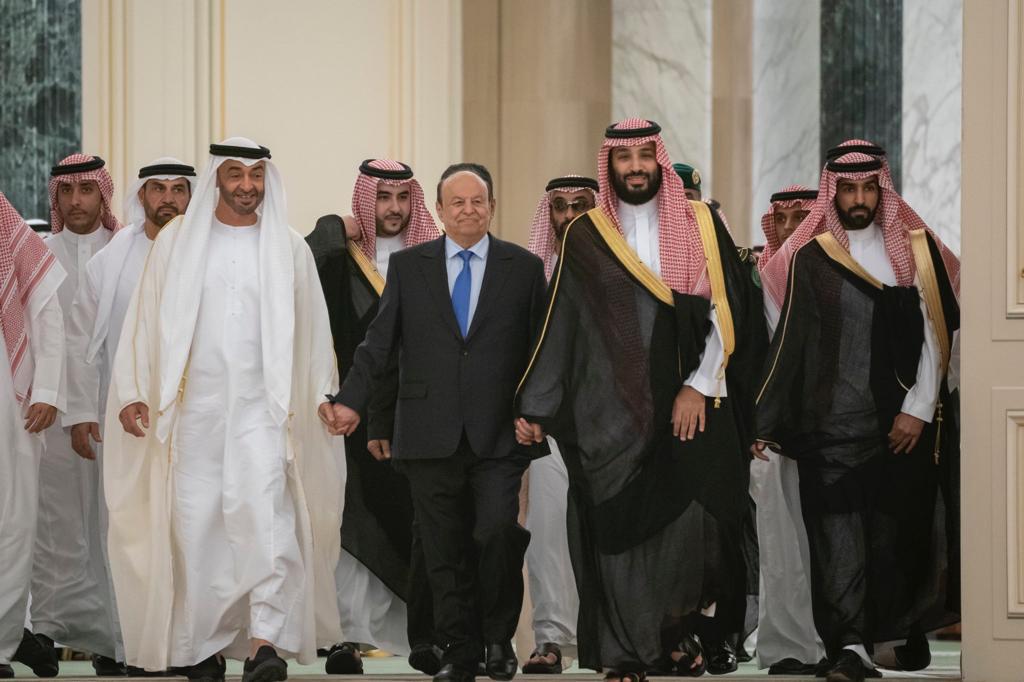 Under the auspices of the Custodian of the Two Holy Mosques, King Salman bin Abdul-Aziz Al-Saud, and in the presence of His Royal Highness, the Crown Prince of the Kingdom of Saudi Arabia, Prince Muhammad bin Salman, and His Royal Highness, the Crown Prince of Abu Dhabi, Sheikh Mohammad bin Zayed, and the Yemeni President, Abd Rabbo Mansour Hadi, and members of the Southern Transitional Council, the Riyadh Agreement was signed today, Teusday, November 5th, 2019, which aims at mending the rift between the Yemeni people in order to get to a peaceful and consensual resolution of the conflict, based on major guidelines and established references, in order to open avenues of optimism for the wind of resolving all other Yemeni disputes.

The Riyadh Agreement opens the prospects of a political solution and enhances the peace efforts in Yemen.

SALIENT POINTS OF THE RIYADH AGREEMENT:

The patronage of the custodian of the two holly mosques king Salman bin Abdul Aziz and HRH crown prince to
Riyadh Agreement reflects the Saudi leadership Keenness to safeguard the strategic interest of Yamen and stability and sovereignty of yamen.

The presence of the Yamani president Abdu Rabu Hadi and both government and transitional Council Delegates who is going to sign the Riyadh is the guarantee to implement the this agreement fully.

The participantion of Shiekh Muhammad Bin Zaid is an evidence of the solidarity unification and solidarity of the Arabian alliance to restore the Yamni legitimacy and the Keenness of UAE to fully support the Riyadh agreement and restoring peace stability and national unity of yamen and also rejection of the Iranian sectarian agenda in Yamen.

The Riyadh Agreement emphasizes strict measures to manage the country’s financial resources in order to achieve economic stability and raise the efficiency of expenditure,, and activating the role of parliament in the fields of evaluation and control.

The Riyadh agreement stresses joining efforts to restore security stability and sovereignty in Yemen, and combat terrorism. This will be achieved by reorganizing and training counter-terrorism special forces, consistent with the Coalition’s objectives to establish regional and international security, and its keenness to maintain security, reject all forms of extremism, and expose its sources.

The Kingdom is a key player to any solution in Yemen and the region, and has managed this dispute with wisdom that prevented bloodshed among Yemenis, and led to a peaceful, consensus-based solution built on key principles and reference points.

The Arabic Coalition to restore the legitimate government appreciates the response and cooperation of all parties in reaching a peaceful solution to the crisis and an agreement that prioritises Yemen’s strategic interests and contributes to its security and stability.

The Kingdom supports a peaceful political solution to the Yemeni issue. The Riyadh agreement calls for optimism that a solution to all crises in Yemen can be found if there are honest intentions on all sides to reach such a solution.

The Riyadh agreement reaffirmed commitment to the three terms of reference: the Gulf Initiative and its executive mechanism, the outcomes of the comprehensive national dialogue, and UN Security Council Resolution 2216.

The Riyadh agreement included mechanisms and arrangements for activating the roles of all Yemeni state authorities and institutions, and reorganizing the military and security forces under the leadership of the Ministries of Defense and Interior.

The Riyadh agreement affirmed commitment to full civil rights for all Yemeni people, renouncing regional and sectarian discrimination and divisions, and halting all kinds of negative media campaigns among all parties.

Yemen is on the verge of a new developmental phase, led by a government of politically competent individuals, and comprised of no more than 24 ministers with established competency, integrity, and expertise. The National unity government will work in full harmony under Yemeni President Abd-Rabbu Mansour Hadi, with a mission to unify the nation and activate state institutions to serve all Yemeni citizens and meet their living needs.

The appointment of leaders, governors, and officials must be based on competence, integrity, and expertise. None of the appointees shall be individuals who participated in the fighting in Aden.

The new developmental phase focuses on the transparent management of state resources, combating corruption through activating accountability and monitoring bodies, and forming the Supreme Economic Council and fortifying it with persons of experience and integrity.

The military and security forces in the southern provinces will play a role in enhancing security and stability, and maintaining the security of state institutions, after being reorganized under the leadership of the Ministries of Defense and Interior

The return of the prime minister to Aden will allow him to activate state institutions and to start paying the salaries of military personnel and civil servants, and to form the new government.

The Riydh agreement respects the demands of all Yemeni sides, including those related to the southern issue, through political dialogue and action, maintaining security, and economic growth.

The Kingdom respects all the components of the Yemeni people and respects what they agree on in the future. Its role is to support Yemen and its people to achieve security and stability.

The Kingdom has supported Yemen politically, militarily, developmentally and in the provision of aid in all provinces to restore the state, end Iranian interference, and combat terrorism.

The Kingdom values the role played by the UAE to reach this agreement, which prioritises the strategic interests of Yemen and contributes to its security, stability, and unity.