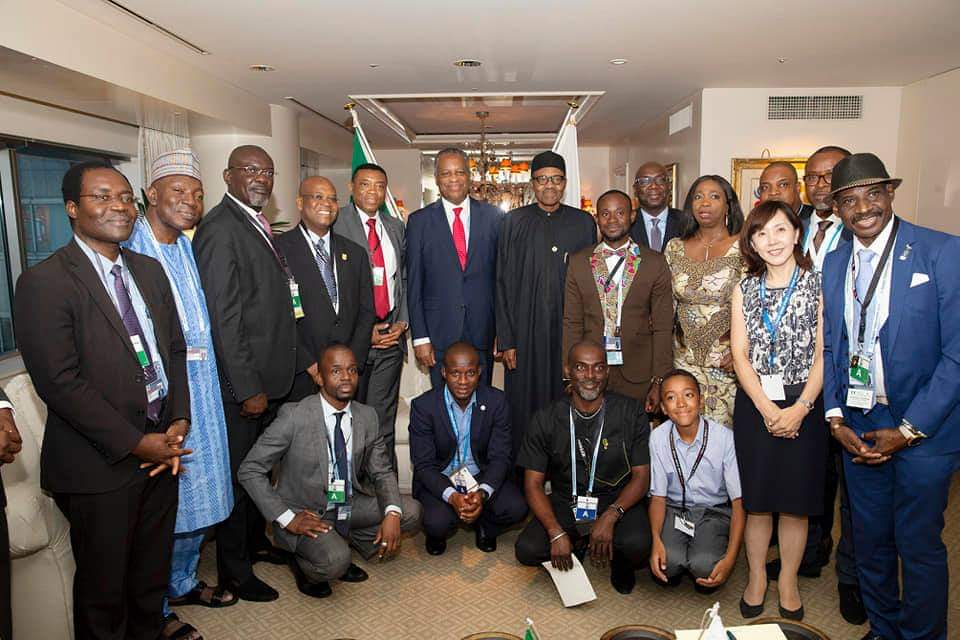 There are Nigerians of sterling character, both at home and abroad. They can stand and hold their own with the brightest and most decent in any part of the world. President Muhammadu Buhari met with some of such on Thursday, which was day four of our stay in Yokohama, Japan, where the Nigerian President and his team are attending the Seventh Tokyo International Conference on African Development (TICAD 7).

Chairman of our Diaspora Commission, Mrs Abike Dabiri-Erewa, described members of the Nigerian community in Japan, who met with the President, as “some of the brightest and best Nigeria has produced.” And so they were.

But permit a brief digression, before we focus on the good Nigerians in Japan, as opposed to some less than decent ones we had seen in previous days.

Thursday was a full day, in which there were a number of plenary sessions and presentations. Our President spoke at the one on Public-Private Business Dialogue, in which he reviewed Nigeria-Japan relationship in recent times, and then submitted:”In view of the ongoing reform programs of our government, Japanese investors are invited to invest in the following priority sectors in Nigeria, namely; power and renewable energy, petrochemicals and gas, maritime (shipping and ports), automobiles, mining, healthcare and pharmaceuticals, ICT and railways.”

-Private sector is the new oil of the African continent. Africa is rich with investment opportunities, but to exploit them, public sector must work in alignment with the private sector.

-There is urgent need to transform the continent through African-led solutions.

-Empowering African youths will unleash potentials of the continent, and provide sustainable solutions to problems of illegal migration.

Of course, Elumelu should know. His UBA has presence in 20 African countries, as well as in New York, Paris and London. His Heirs Holdings, a growing investment holding company, employs over 30,000 Africans.

Back to the good Nigerians!

They came under three auspices. NIDO Asia, led by Professor Ejiogu Emenike, Nigerian Union in Japan, with Nnaji Kennedy Fintan as President, and Nigeria Chambers of Commerce and Industry, Japan, headed by Engineer Ochade Osakwe.
The group was made of academics, scientists, economists, industrialists, businessmen, and a bishop.

Bishop Adebayo runs a church with membership in excess of 22,000. He has been in Japan for about 30 years, married to a Japanese woman, with whom he has-wait for it-seven children. Go ye into the world and multiply, replenish the earth and subdue it, the Good Book says. Bishop Adebayo has obeyed both the letter and spirit of the commandment. He has shown how prolific Nigerians can be.
Kennedy Nnaji runs a factory that recycles raw metal, does business with many countries, and he has created an information app that he says “will transform Africa very soon.” He has lived in Japan for 27 years, married to a Japanese, who accompanied him to the meeting with their young son.

Professor Ejiogu Emenike has been resident in Japan since 1990. He is an expert in Industrial Electronics, Power Devices, and New Energy Systems.

Back home in Nigeria, he is founding director of Laboratory of Industrial Electronics, Power Devices & New Energy Systems, recently engaged in the design and fabrication of megawatt-range 100% local content waste-to-electricity conversion systems as a domestic solution to the Nigerian power problem.
Confidently, he told President Buhari: “We have comparative advantages in human capital development, which we are trying to bring back to Nigeria. Any problem that science and technology can solve, we are able. We can help Nigeria in areas of need.”

Engineer Ochade Osakwe is President of Nigeria Chambers of Commerce and Industry, Japan, and under his leadership, the chambers has attracted many investors to Nigeria.

Christopher Ariri from Edo State, has been in Japan for 28 years. A very successful businessman, he is married to a Japanese, and they have two daughters.
What shall we say of Goke Dokun, Idowu Ayodeji Peter, Dr Sam Ogbonna Onyisi (mni), Dr Fred Adebayo, Ikenna Ariwodo, Charles Nwokeji, Shonde Samuel, Brite Eguavoen, Engr Antonio Okpara, Charles Owie, Dr Fatima Joshua, and many other accomplished Nigerians in Japan. Good ambassadors they are, and a delighted President Buhari told them:

“There are Nigerians in the Diaspora that are giving us a bad name by engaging in criminal activities. These Nigerians are a minority, they do not represent the values of our country, and I plead with them to change their ways.
“I am personally very happy that there are millions of Nigerians all over the world, like you here, who are truly making us proud.”

On a final note, President Buhari has made many appearances in Japan, spoken at two events, will speak at another on Friday, yet one sees comments by cynics and skeptics on social media, saying he’s not in Japan. They say they want videos of where he is speaking, before they are convinced. As if that is not on Nigerian television stations yet, NTA and Channels, who are here with us. Give them videos, they ask for another harebrained thing. Let me borrow the words of Jesus Christ to answer them:
“It is an evil and adulterous generation that asks for a sign. And no other sign shall be given them, except the sign of Jonah.”

We can only say good luck to them.