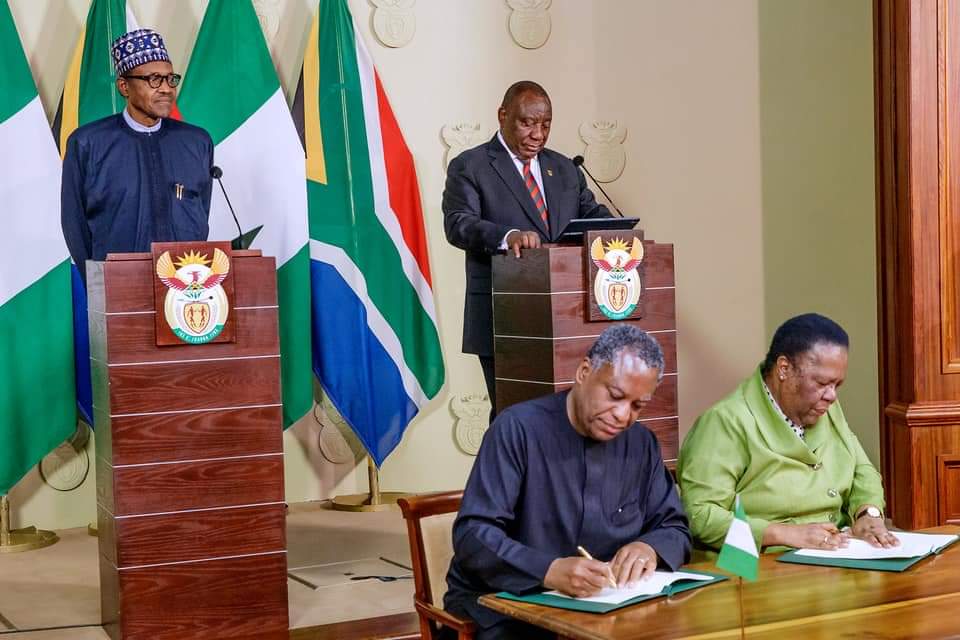 At the invitation of my Brother, President Cyril Ramaphosa, I arrived South Africa yesterday for a State Visit and the inaugural meeting of our Bi-National Commission at Heads of State level;

My delegation and I have been warmly received by the Government and people of South Africa;

During the course of the working session, we reviewed a wide range of bilateral, regional, continental and global issues of common interest and concern to our two countries and peoples;

We underscored the long historical ties of friendship and solidarity between our two peoples which have since been upgraded to a special and strategic partnership, manifest in the large number of agreements between our two countries;

We agreed on the need for us to strengthen even further our cooperation in areas such as peace building, good governance and sustainable development in Africa, in order to deliver “”the Africa we want.”

We noted with satisfaction that the 32 signed agreements and MoUs between the Republic of South Africa and the Federal Republic of Nigeria, cover such areas as trade, investment, energy, mining, defence and security issues, police affairs, immigration, tourism and environment among others.

Against this background, our two countries have also agreed to unequivocally address the challenges in our relations including the recent people to people challenges that saw attacks against foreign nationals, including Nigerians, and their properties, which we strongly condemned.

We have decided to work and take concrete measures together to prevent the recurrence of such unacceptable incidents in the future.

We have also committed to reinforcing our leadership role for peace, security and development in Africa.