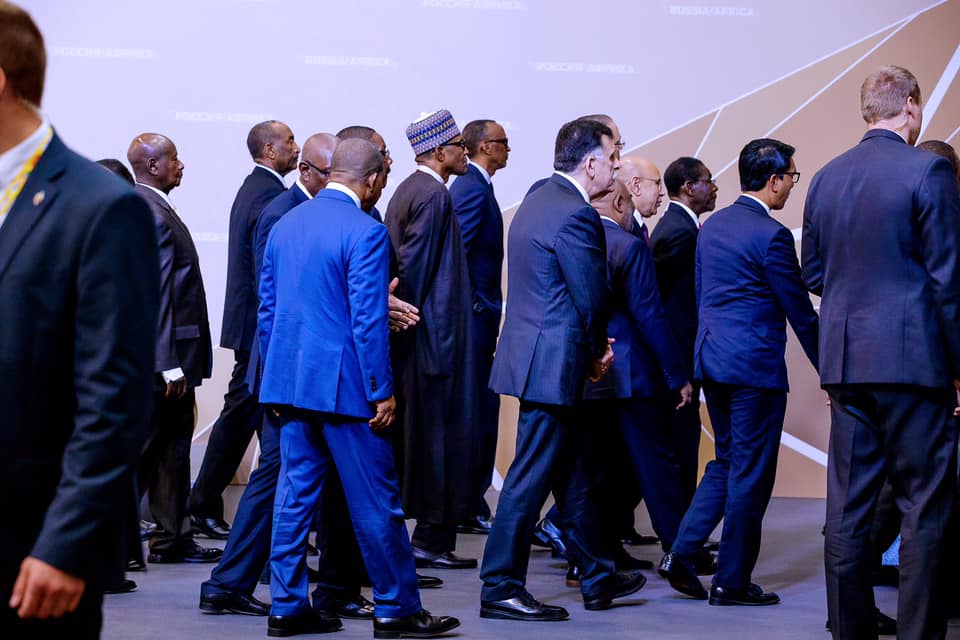 President Muhammadu Buhari Thursday in Sochi, Russia, said fresh energy will be injected into Nigeria-Russia relations to bolster an age-long relationship that has been mutually rewarding and promising, while calling for a stronger partnership that is humane, inclusive and diversified.

In statement at the second plenary of the Russia-Africa Summit, where more than 40 leaders are participating, President Buhari said the initial warmth and harmony enjoyed with the former USSR after Nigeria’s independence in 1960 should be revitalized so that citizens of both countries can benefit from soci0-cultural, educational, technological and trade exchange.

The Russia-Africa Summit is co-chaired by President Vladimir Putin of Russia and African Union Chairman and President of the Arab Republic of Egypt, Abdel Fattah El-Sisi.

“Nigeria’s relations with Russia just like the rest of Africa began during the Soviet era when diplomatic relations were first established in 1960. That relationship covered areas such as education, healthcare, solid minerals development and military assistance especially during Nigeria’s civil war.

“More recently, our partnership has extended to the oil and gas sector as well as military and technical assistance in support of our fight against Boko Haram insurgency. At this point, I would once again like to thank His Excellency, President Putin for his support especially in the area of security.

“It is my hope that through this forum, Russia and Africa will revitalize their time-tested relationship by exploring new opportunities for the collective benefit of our peoples,’’ the President said.

President Buhari said the collapse of the USSR in 1991 affected relations between Russia and African nations, which lagged behind historical levels, noting that the former Soviet Union had been a key partner of Africa.

“We all remember the strong support we received from the former Soviet Union in our anti-colonial struggles. Africa will continue to remember this, and many other significant gestures of solidarity and support that shaped our history as a continent. We are eternally grateful to the Soviet Union for coming to the aid of Africa in its hour of need.

“As we live in an increasingly changing world driven by trade, technology and innovation, the time has come to inject new energy and pragmatism in Africa-Russia relations for the mutual benefit of both Africa and Russia,’’ he added.

“Our continent is rich in human and natural resources but is lagging behind in capital and technology. This is why we see increased conflict, migration and instability that is also impacting many nations outside Africa.

According to the Nigerian President, the inclusive economic diversification agenda of Africa, captured in the visionary Agenda 2063, will forge a new Nigeria-Russia cooperation, pointing out that progress had been witnessed in areas of power generation, solid minerals development and rail transportation.

President Buhari said the progress should be expanded to agriculture, manufacturing and other means of transportation, adding that “we already have over 200 Nigerian university students in Russia benefiting from Russian Government scholarships which have been on-going since 1960. Earlier this year, Nigeria signed a Bilateral Education Agreement (BEA) with Russia which will expand the human capital development support we are already receiving.’’

Quoting late Dr. Martin Luther King, Jnr, the President said peace and prosperity can only be achieved through collaboration and mutual respect.

“We are caught in an inescapable network of mutuality, tied in a single garment of destiny. Whatever affects one directly, affects all indirectly.”