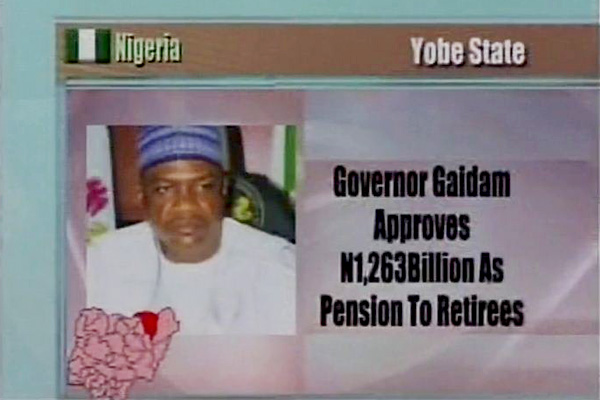 Payment of Pension to Retirees

Yobe State Governor, Alhaji Ibrahim Gaidam has approved the payment of One point 263 Billion Naira as Pension in the services of state and Local Government for the year 2013. Out of this amount 590 Million will be paid to 1,296 people, who have retired from the services of the state government while 673 million will be paid to 568 local government retirees. The Governor has also set up a committee under the Chairmanship of Alhaji Bukar Chidami former Executive Chairman of the State Revenue Board to oversee payment for the state government retirees while the local government Pension Board will undertake payment for workers who retired from Local Government service.

Governor Gaidam in a statement signed by the special Advice Press Affairs and Information, Abdullahi Bego stated that the prompt payment of retirees benefit is part of his Administration’s efforts to ensure that people who have served their country meritoriously do not suffer in retirement and it will also serve as a boost for enhanced productivity and service delivery to the people.