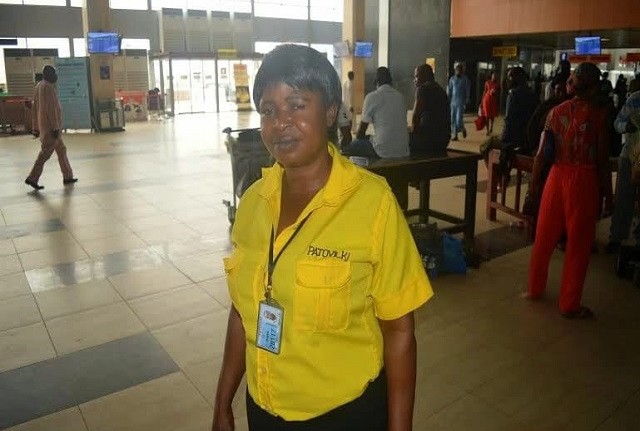 Mr Haminu Makama, the Deputy Commissioner of Police, Airport Command, presented a plaque and a certificate to Ugwu on behalf of the PCRC members.

Ugwu, a cleaner with a concessionaire of the Federal Airports Authority of Nigeria, Patovilki Industrial Cleaning, returned the money on February 16.

The patriotic act of the woman, who was on a salary of N7, 000 per month as at the time of the incident, attracted commendations across the country.

Makama urged her to continue with her honesty, in spite of the high rate of unemployment in the country.

Mr Haminu Makama, the Deputy Commissioner of Police, Airport Command said Ugwu was honoured for doing the right thing in a society where many would have disappeared with such money.

According to him, her conduct will go a long way in projecting the image of the country, even in the international community.

The deputy commissioner of police urged other Nigerians, especially workers, to emulate her exemplary character in their conducts.

Lamidi said; ” Today, we are recognising a honest worker who has displayed great character that is worthy of emulation to others.’’

According to him, in the past 24 hours, a group of bandits forced its way into banks and stole several millions of naira, while only one person returned N12 million that belonged to a passenger.

“I believe that with what she has done, she should be recognised by all. The money she returned was much, but there are some rewards that are bigger than money.

“PCRC is very impressed with your courageous and honest behaviour and this is worthy of emulation, “he said.

Responding, Egwu said that it was not the first time she was returning money within the Airport vicinity.

She recalled that sometime ago, she returned N600,000 left at the airport toilet and later, another sum of N3 million was equally returned.

She thanked the PCRC for recognising her good behaviour and promised that she would continue to display honesty in all her deeds.

She disclosed that she had not got the job promised her by the management of FAAN, adding that it was still being processed.

NEWER POSTHouse Of Reps Apoligizes To Nigerians Over The Fracas On The Floor
OLDER POSTINEC Chairman, Six Other National Commissioners To Bow Out Next Week, June 30th