PRESS RELEASE: FOR IMMEDIATE USE 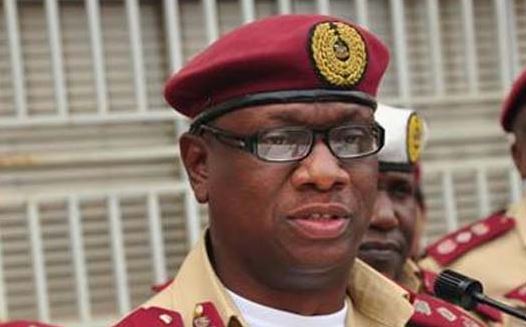 In order to further reduce road traffic crashes across the country, the Corps Marshal and Chief Executive of the Federal Road Safety Corps Boboye Oyeyemi has read a riot act on operators of rickety vehicles plying the nation’s highways, indicating that the Corps will commence a nationwide prosecution of owners or operators of such vehicles.

The Corps Marshal stated that the nationwide exercise which will commence on 1st  March,  2015, forms part ofD the Corps’ commitment towards sustaining the tempo of its operational activities and to create safer motoring environment in the country, anchored on its 2015 strategic goals of reducing road traffic crashes by 20% and fatalities by 30%.

According to Oyeyemi, one of the core values of the FRSC is to improve on its regulatory capacity and enforcement of traffic rules and regulations, in addition to rescue and advisory capacity, targeted at drastic reduction in road traffic crashes.

While recalling the common sight of poorly maintained vehicles on the nation highways which often break down and result in obstructions of traffic flow, the Corps Marshal also warned motorists to ensure regular maintenance of their vehicles in view of inherent traffic hazards associated with abandoned broken down vehicles especially at night.

Similarly, the Corps has concluded plans for total enforcement on number plate violations, and the prosecution of motorists with fake drivers’ license in line with the provisions of Section 74 (1) and (2) of the National Road Traffic Regulations (2012). Prospective drivers are therefore advised to approach FRSC designated Drivers’ License Centers, States Board of Internal Revenue and Vehicle Inspection Offices (VIO) nationwide, to obtain their genuine vehicle number plates and driver’s license.

In this connection, the Corps has mandated its Commanding Officers across the country, to commence immediate arrest and prosecution of motorists with faded number plates.

The Corps Marshal also reminded the motoring public of the Corps on-going enforcement of overloading regulations and the build up towards implementing compulsory installment of speed limiting devices on vehicle from 1st June 2015.

Meanwhile, the Corps is determined to ensure safety of lives and property on the nation’s highways.