President Muhammadu Buhari is in Daura, Katsina State on a Private Visit.

President who left Abuja at about two o’clock Friday after the Jumaat prayers was seen off at the Nnamdi Azikiwe International Airport by the Minister of FCT Muhammad Musa Bello and other senior Government officials.

On hand to receive him at the Katsina International Airport were Governor Aminu Bello Masari, his deputy, Members of the State Executive council, principal officers of the state Assembly, the Political class as well as the Business community. 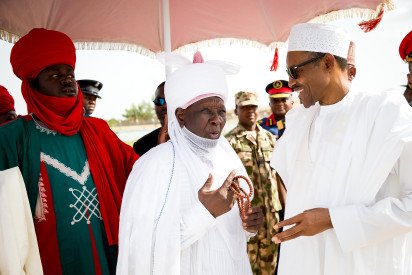 The Emir of Katsina Alhaji Abdulmumini Kabir Usman also led other traditional title holders to give the President a rousing welcome.

From the Airport, President Buhari proceeded to his home town Daura where hundreds of people turn up to receive him.

Among them is the Emir of the Ancient Kingdom of Daura Dr Farouk Umar Farouk as well as the locl Council officials.

This is the first time the President is visiting home after his vacation in the United Kingdom early last month.