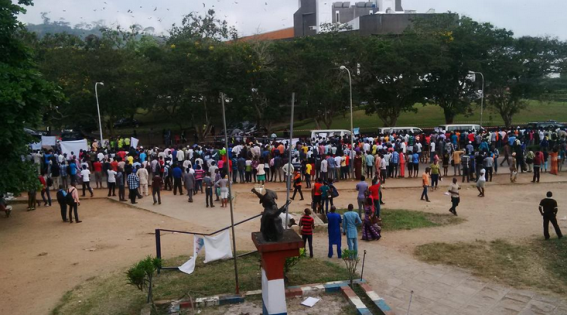 It is no news that we have been at home for 91days now hoping to resume. We have used hashtags like #reopenoau #wewanttoresumeoau to draw the attention of the authority to the plight of the students of Obafemi Awolowo University, Ile-Ife.

Truth be told, the struggle for leadership of the school should not be allowed to stop school activities and more important is the halting of future prospect of nearly 30,000 students.

We were suppose to resume June 26th this year after spending 3 months at home from the second semester break. We are lagging behind enormously and this is really bad. The students of great ife are tired of the whole system because of the slow academic calendar especially when our friends in other schools are making progress.

The school called an indefinite strike because of the protest led by the non academic staff of the university NASU over the appointment of the new VC Prof Salami.

I join in the #ReopenOAU campaign. We can’t afford to take forever to resolve this crisis. Our students’ lives & their education matter.

The reason for the protest is “the appointment of the new VC is illegal” according to OAU NASU and they have been a serious protest over this issue for months now.

The Federal government earlier this month dissolved the governing council and said the school registrar should act as Vice Chancelor pending when court treats the case of the incumbent VC prof Salami.

OAU is the best university in Nigeria, how do we retain this position with the constant strikes? #ReopenOAU pic.twitter.com/xcnUrmwmhG

Since then we haven’t heard any thing from the school as regard resumption. Truth be told, the struggle for leadership of the school should not be allowed to stop school activities and more important is the halting of future prospect of nearly 30,000 students.