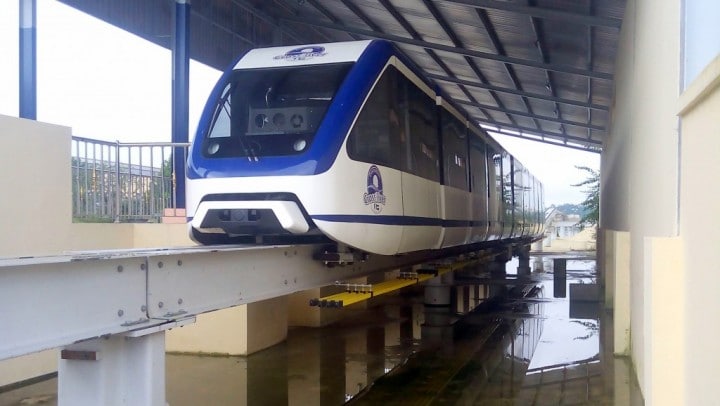 The Nigerian Railway Corporation traces its history to the year 1898, when the first railroad in Nigeria was constructed by the British colonial government. On October 3, 1912 the Lagos Government Railway and the Baro-Kano Railway were amalgamated, starting nationwide rail service under the name Government Department of Railways. With the passing of the Nigerian Railway Corporation Act of 1955, the company gained its current name as well as the exclusive legal right to construct and operate rail service in Nigeria. The rail network reached its maximum extent shortly after Nigerian independence, in 1964. Shortly after that, the NRC entered a long period of decline, inept management, and eventually a complete lack of maintenance of rail and locomotive assets. In 1988, NRC declared bankruptcy, and all rail traffic stopped for six months. After that, trains resumed, where the tracks were usable. By 2002, passenger service was again discontinued altogether. Starting in 2006, plans were made to restore the rail lines and add new locomotives with foreign assistance. In December 2012 regular, scheduled passenger service was restored on the Lagos to Kano line.

In February 2011, it was announced that construction was about to start on the Abuja – Kaduna railway. On 26th July 2016 the NTA reported that President Muhammadu Buhari had formally opened the 186km (150 mile) line linking the capital Abuja with the northern city of Kaduna. Although the project was completed in December 2014, the coaches had been delivered 15 months later. Trains will carry passengers and cargo at speeds of up to 150km/h and the journey will take two hours.

Last week, Nigeria also opened a first of its kind light rail system – boosting the potential for employment and expansion within this sector of the economy. Thus it came as no surprise that the Nigerian Railway Corporation will need more workforce to handle the accelerating expansions on its rail networks.

Also READ: Cattle To Be Moved From The North To South By Rail – NISRAL

In a public statement on August 26, the Corporation stated due to recent expansion and introduction of new routes, Nigerian Railway Corporation is hereby recruiting into the underlisted post.

Interested candidates possessing OND, HND OR UNIVERSITY DEGREE IN RELEVANT FIELDS should apply through e-mail to [email protected] Deadline for application as released by NRC press team is 18th September, 2016.