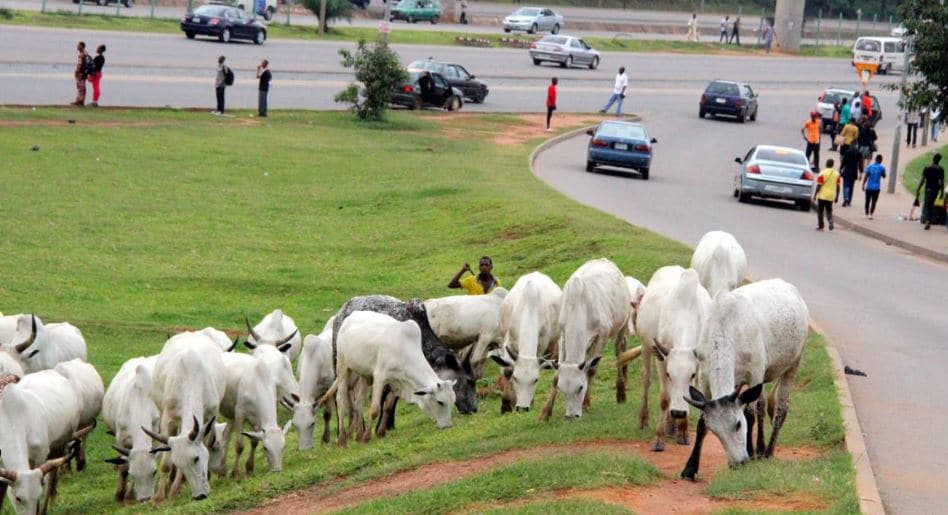 FCTA Asks Herdsmen to Move Cattle Out of Abuja City

As part of efforts to totally stop cattle grazing in Abuja metropolis and major entrance and exit highways into the city center, the FCT Minister, Malam Muhammad Musa Bello has met with members of the Miyatti Allah Cattle Breeders Association of Nigeria, FCT Chapter.

During the meeting in his office, the Minister reiterated that herdsmen must move their cattle out of the Federal Capital City because there is no way, such animals can co-habit with the residents.

Malam Bello emphasized that even for safety reasons, cattle should not roam on the streets and highways in the city and this is not because the government wants to prevent cattle breeders from rearing cattle in the Territory.

His words: “You have to understand that when Abuja Environmental Protection Board says cattle should not roam the city, it is not because they want to prevent cattle breeders from rearing cattle in the FCT. Basically, it is just for safety. It is for the safety of your cattle and above all, the safety of the citizens.”

According to him, “In a modern city, it’s not possible for animals and vehicles to move together on the roads because this could cause accidents which in some cases could be fatal, and it is our duty to protect lives and property”.

In order to achieve meaningful results, the Minister implored the Association to nominate some of their members to serve in the Ministerial Task Team on Environment under the Chairmanship of Squadron Leader, Abdullahi Adamu Monjel to ensure that there is smooth communication between FCTA and the Association.

“You can give him some number of educated young men in your communities who will be part of some of these Committees so that they will be able to communicate,” he added.

Malam Bello said that the FCT Administration has moved a step further to even identify new grazing reserves that will cater for their requirements.

“A total of 33,485 hectares have already been earmarked for grazing reserves to cater for about 7 million herds of cattle comprising of Paikon Kore – 8,500 hectares, Karshi – 6,000 hectares, Kawu in Bwari – 9,000 hectares and Rubochi in Kuje which is 9,985 hectares,” the Minister revealed.

Malam Bello noted that the critical issue is compensation for the farmers that are there but assured that his Administration will work together with the National Assembly to resolve that amicably.

The Minister remarked that the FCT Administration may even reach out to the host communities to work out a situation where compensation does not have to be in monetary terms because of the large expanse of land involved.

“Nothing should prevent the communities that are there and the Fulanis living together because you don’t always have to move people away,” he stressed.

The Minister thanked Miyatti Allah for its support to the FCT Administration and also to the Federal Government and urged them to continue to robustly support the government of President Muhammadu Buhari.

Speaking earlier, the Chairman of the FCT Chapter of Miyetti Allah Cattle Breeders Association of Nigeria, Malam Yahaya Isah promised to continue to interface with the government to promote peaceful co-existence.

He assured that his Association will enlighten the members not to breed their cattle on the streets and highways of Abuja again.