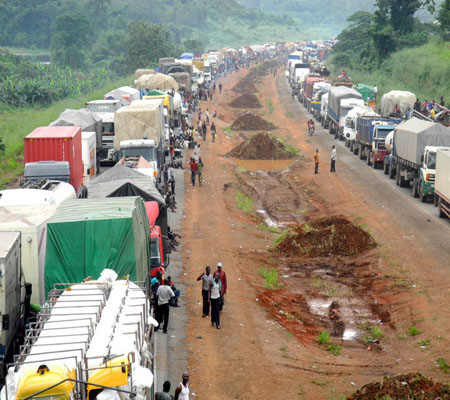 NAN: The Federal Road Safety Corps (FRSC) has advised motorists plying Lagos-Ibadan Expressway to avoid being caught in a gridlock.

It explained that fuel-laden tanker fell in Sagamu Interchange and spilt its contents on the road.

The Sector Commander of FRSC in Ogun, Mr Clement Oladele, said in a statement on Tuesday that the articulated vehicle fell in the early hours of Tuesday morning.

He said that efforts were on to prevent fire outbreak.

FRSC officials were already on the ground including fire service personnel.

“Due to the tanker conveying fuel which fell at Sagamu, the resultant gridlock on Lagos/Ibadan corridor has affected traffic as efforts are ongoing to prevent fire outbreak, ‘’ he said.

The sector commander said that combined teams of FRSC and Traffic Compliance and Enforcement Agency (TRACE) were on ground to normalise the situation.

Meanwhile, FRSC on Tuesday advised motorists to maintain safe driving habits and refrain from casting aspersions on the last four months of the year.

Mr Abdulhakeem Abdulkareem, the FRSC Director of Operations, Omu-Aran Unit Command in Kwara , made the appeal while inaugurating the unit’s “ember’’ months campaign in Omu-Aran.

The News Agency of Nigeria (NAN) reports that September, October, November and December are usually regarded as “ember’’ months in the transportation sector.

Abdulkareem said there was no iota of truth in the popular belief by some people that the last four months of the year were always under the spell of accidents and other negative tendencies.

The FRSC boss emphasised that the last four months of the year are noted for a high volume of traffic, especially, on the nation’s highways, due to Christmas and New Year activities.

According to him, a majority of road crashes being experienced are due to avoidable human errors which should not be attributed or laid at the door step of any spiritual influence.

“Let me advise that all the 12 months of the year are sanctified by our creator. Erase the obnoxious impression that any of such months are road crashes prone and inclined.

“This is false and fallacy. Your safety and security greatly lie in your hand by doing the right thing always. Let us apply the principle of defensive driving whenever driving on the roads,’’ he said.

Abdulkareem also advised motorists to imbibe the habit of adequate and timely maintenance of their vehicles to guard against unwarranted crashes.

Alhaji Yakub Adesina, a representative of the National Union of Road Transport Workers (NURTW) from Omu-Aran, reiterated the body’s commitment toward sustaining the cordial relationship with the commission.

Mr Jacob Opeyemi, a representative of the Road Transport Employer Association of Nigeria (RTEAN), on his part, expressed members’ readiness to fully comply with traffic rules and regulations.

He said the union leaders had intensified its sensitisation on the need for members to desist from driving under the influence of alcohol and other related vices.

The News Agency of Nigeria (NAN) reports that a mini- drama was staged by some Corp members serving in the area as a way of educating the public on the menace of dangerous driving.

NEWER POSTCentral Bank: ”It is not true that CBN allocates dollars”
OLDER POSTPresidency: Emir Sanusi is Wrong on External Borrowing