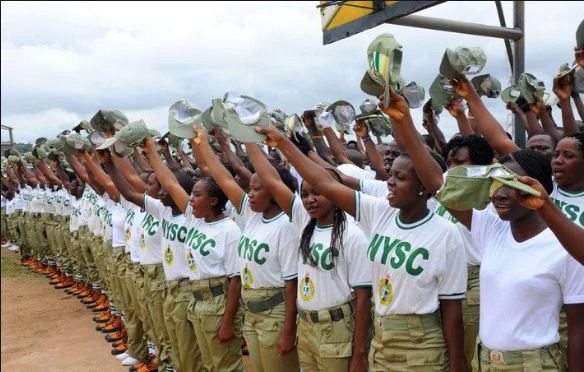 The Federal Government has urged state governments to improve facilities at all National Youth Service Corps (NYSC) orientation camps in their various states.

The Minister of Youths and Sports, Mr Solomon Dalung who gave the directive said that the government could not continue to risk the lives on its citizens in dilapidated camps.

Dalung spoke in Abuja when he paid a condolence visit to the NYSC Director-General, Brig.-Gen. Sule Kazaure at the NYSC Headquarters, Abuja.

The minister made it clear that the government had no intention of scraping the scheme or making it optional.

The minister condoled with the family, Nigerians and the NYSC on the death of three 2016 Batch ‘B’ corps members who died while undergoing orientation course in Kano, Bayelsa and Zamfara states.

He noted that most orientation camps in the country could not boast of modern facilities to cater for the needs of corps members while undergoing the mandatory orientation course. 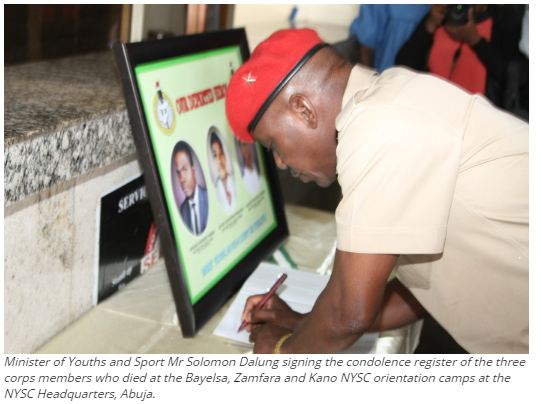 Dalung said the Federal Government would not allow such trend to continue hence state governments needed to take necessary steps towards updating facilities in all camps.

“The sudden news of their demise is highly unpalatable. The country is devastated because we expected that this great Nigerians will live to give their quota towards the development of the nation.

“We are at a time when the country is facing serious challenges and we need everyone to be on deck to move the country forward.

“On behalf of the President, Muhammadu Buhari, the Federal Republic of Nigeria and Nigerians we convey our heartfelt condolences to the families of this great Nigerians who paid the ultimate price,” he said.

Dalung said that the federal government would continue to support and improve on the development of the NYSC.

The minister made it clear that the government had no intention of scraping the scheme or making it optional.

He explained that the scheme was the only machinery that fostered the integration of youths in the country and created avenues for jobs.

Earlier, Kazaure presented to the minister the summary of investigation into the death of corps member Oladepo Ifedolapo Rachael (KN/16B/1847) who died while undergoing the course in Kano.

The DG said that from the findings of the investigation, the deceased had an ailment which she did not disclose adding that she died of renal sepsis occasioned by infection and not negligence as earlier reported in some dailies.

He said that the purpose of the investigation was not to justify the death of the corps member but to establish the facts surrounding her death against the backdrop of unfounded insinuations by the press.

“From the evening of November 27, 2016 up to the early hours of 29th, the corps member was promptly attended to.

“ The allegation of negligence on the part of NYSC is unfounded.

“The Orientation Camp clinic where the corps member was first treated has a total of 31 qualified and registered doctors, 20 pharmacists and 11 nurses.

“ There are no student doctors as all the doctors are fully certified by the Medical and Dental Council of Nigeria (MDCN).

“The Camp clinic in Kano Orientation Camp, as in all the camp clinics nationwide, runs 24-hour service hence she received attention at 3 am on Nov. 28 when her friends brought her in from the hostel.

“There was no delay in referring the deceased to the secondary hospital when the camp clinic doctors found that her case was beyond what could be managed in the camp clinic.

“We have also established that at no time was the deceased left unattended at the Gwarzo General Hospital as the nurse who accompanied her to the hospital is a staff of the hospital.

“Like many corps members do upon arrival at the Camp, it is clear that the deceased had an ailment which she did not disclose.

“From the doctors’ report, the corps member died of renal sepsis occasioned by infection. Even to the untrained, Kidney infections do not develop and degenerate to the level of mortality in three days,’’ he said.

Kazaure said close friends of the deceased who were by her side all through at the camp had also attested to the prompt attendance at the clinic by the doctors at the camp.

The DG said that the deceased was neither forced nor harassed to take part in any parade at the time of her ailment.