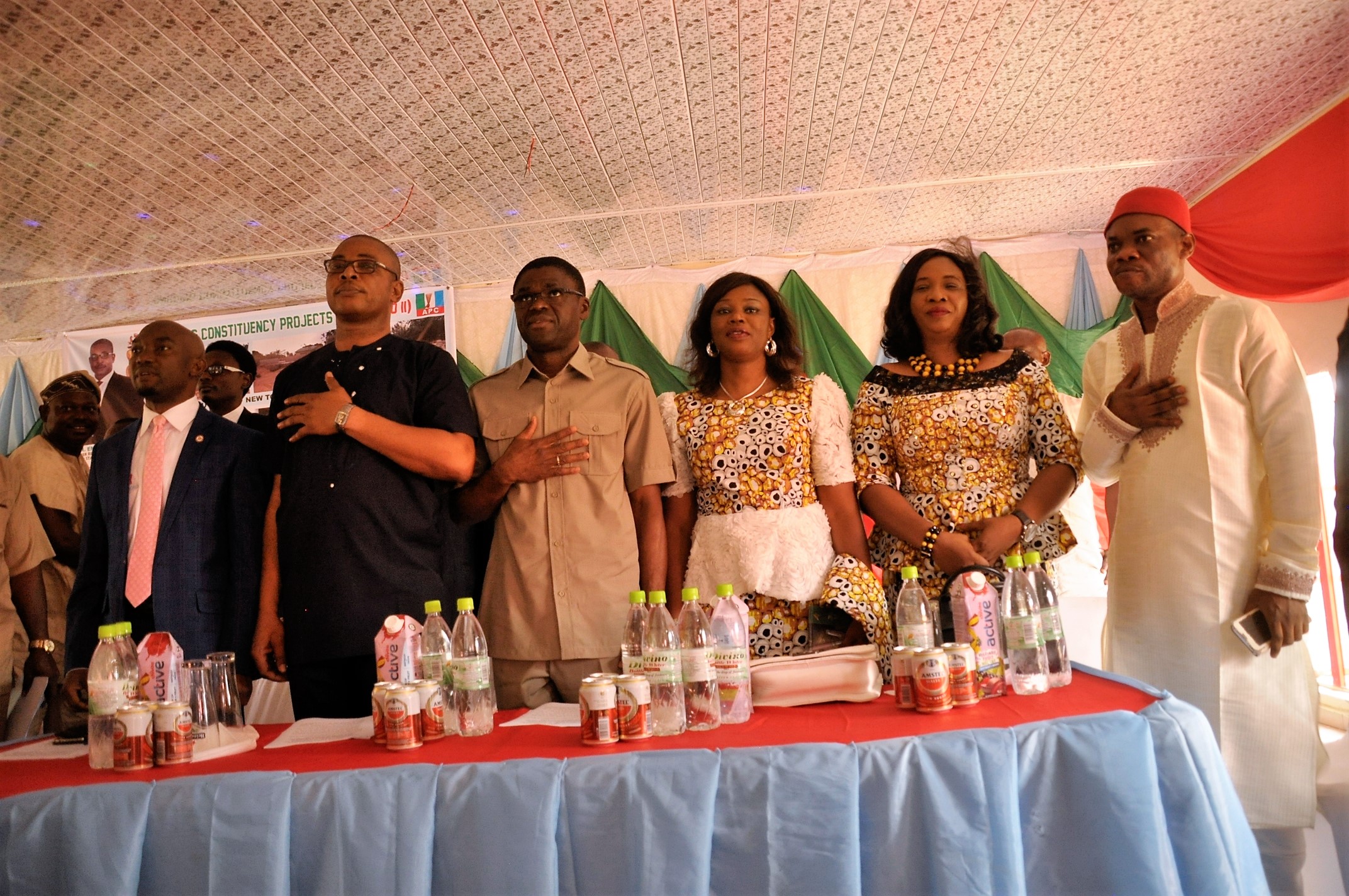 The state government’s commendation arose from the recent federal government’s pronouncement on the ban of importation of rice and clothing materials as part of its efforts to encourage self-sufficiency through entrepreneurship and small and medium scale businesses.

Shaibu, who at the occasion, reiterated that Gov. Godwin Obaseki would never renege on his electioneering promises, disclosed that plans had been concluded to commence the process of registration of youths for employment.

He said, “Edo State Government under the able leadership of my boss, the Governor of Edo State, Mr. Godwin Obaseki, have decided in line with our electioneering promises, before election, that we would create about 200, 000 jobs. 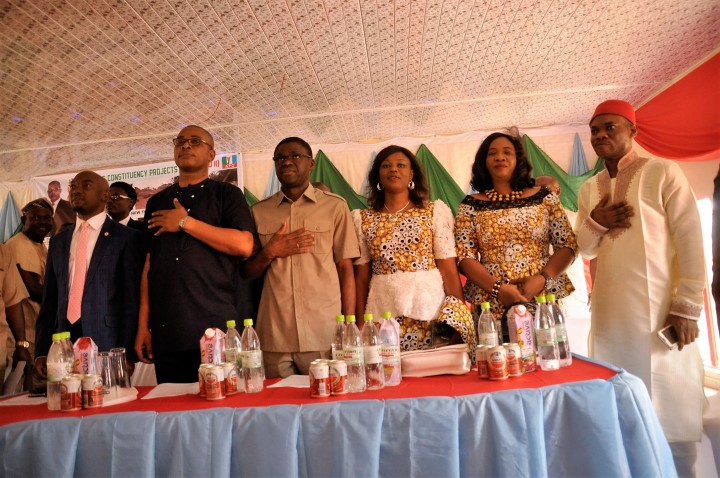 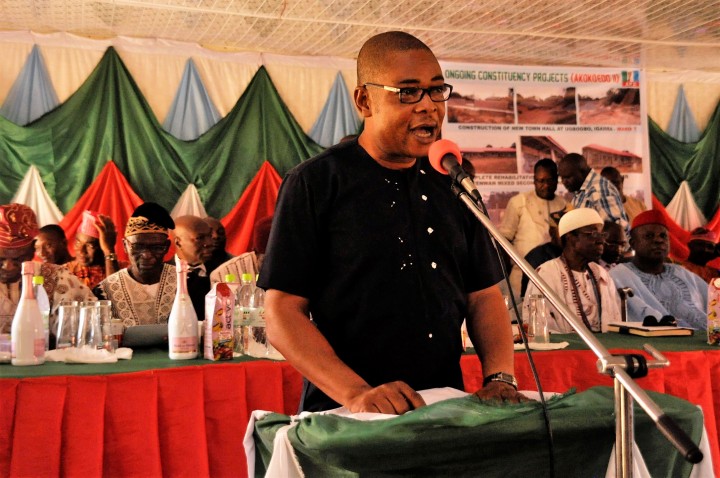 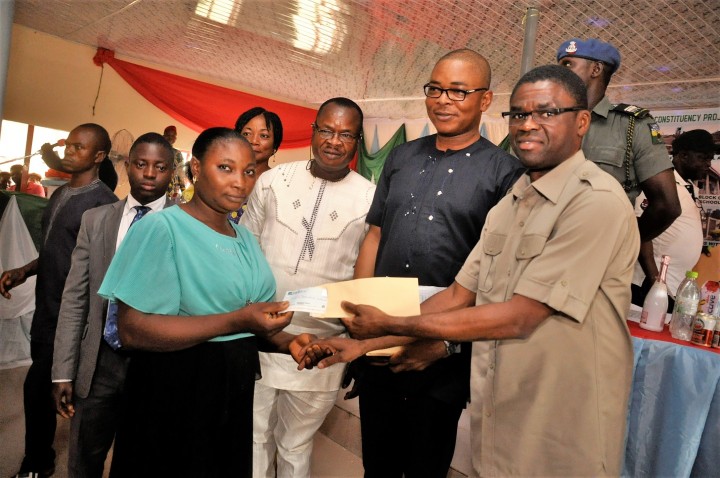 Edo state Deputy Governor, Rt. Hon. Philip Shaibu handing over a check to one of the beneficiary of the grant

“The youths consist of both young men and young women who do not have jobs. Those who have graduated from school, those who have completed secondary education but could not continue with their education.

“Those who learned different trades and have acquired technical skills, we need all their names.

“Those who have no jobs should submit their names to their ward chairmen who would in turn submit the names to the Honourable member representing you in the House of Assembly.

`the Honourable member will hand the names over to me, and I will give the names to the Governor. By the grace of God, this is the beginning of the creation of 200,000 jobs.

“This is the era of teaching people how to fish, how to work and not teaching how to give you fish.

“The Governor has said I should tell the youths to drop their names with their ward chairmen or if it is the women leaders they see.

“What is important is that they drop their names and phone numbers. We will get that data and you will hear from us.

“When the time comes, we will call you directly for the jobs. Please tell all our boys and all our girls who are ready to work.”

The Deputy Governor said the people should continue to pray for the government, saying “the Governor needs your prayers.

“We need your prayers to succeed because without prayers, all those good things we want to do will not be possible.

“I want to assure you that the good work former Governor Adams Oshiomhole has done, the foundation that he has laid, we have already started building on it.

“By the grace of God, we will take Edo State to the next level.”

Shaibu commended Hon. Agbaje for his initiative, saying that “what the Honourable has done today indicates that he has given you a hook to fish.

“When you fish, you will sell the fish and make money, and when you make money, you won’t have to beg anyone for money.”

Addressing the beneficiaries, the Deputy Governor said, “The Honourable has given you money to trade because he wants life to be better for you.

“So, I plead with you to sow this seed into your business so that it will grow, and by the grace of God it will grow.

Speaking earlier, Hon Agbaje said his gesture was in fulfillment of his electioneering promises to women of his constituent.

He said, “I have come up with this initiative in line with my campaign promises to create an opportunity for our women to be able to grow their small businesses which will provide support for the family as well as create wealth if diligently managed.

“In pursuit of the above, I have sourced and made available the sum of N2.5m as grant to ten women from each of the five wards of Constituency II totaling 50 beneficiaries.

“Each beneficiary will be able to access the sum of N50,000.00 to be paid in ten months at equal installment and interest free.”

According to Hon Agbaje, “The present reality of our economic lives today calls for the philosophy of self-help which I considered as essential bedrock of our survival, both as an individual and as nation.”

Hon Agbaje used the occasion to itemized other several of his constituency projects executed since elected as lawmaker.

The high point was the presentation of empowerment cheques by the Deputy Governor, Shaibu to the 50 beneficiaries.