It’s Responsibility of All to Make Orphans, Vulnerables Happy – Obaseki

Governor Godwin Obaseki of Edo state on Sunday celebrated with some orphans and vulnerable children in the State with a charge to well-meaning citizens of the State to ensure their happiness.

Obaseki represented by his Principal Private Secretary (PPS) Dr Uyi Oduwa-Malaka said that children and Jesus Christ were similar as both were innocent and pure of heart.‎ 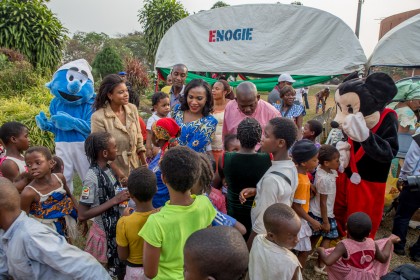 Obaseki said it is the duty of everyone to care for the less privileged and put smiles on their faces just as he appreciated the efforts of the Benin Lions Club District 404 for putting smiles on the faces of orphans and blind children in the state.

He said, “The children we celebrate here today are like all other children that surround us every day only less privileged ad impaired in one way or the other. It is our duty to care for them, protect them and make them happy.”

“The Club has a long list of projects and initiatives. Please adopt or support a project in cash or kind. We all are in this together and we all must do our bit. I wish we could make this happiness last not only for this moment but for a lifetime. It is never okay to sit and stare. We all have a role to play in making this dream a reality.

“The festivities and gifts have added so much happiness to the faces of every child present. Indeed, it is priceless to watch the happiness on each child’s face.”

According to the Governor, “I am not sure how frequently the Lions Club has had this celebration in Benin but I do know that as long as I can remember, the Lions Club has championed many worthy initiatives all around the world. For this and countless others, we thank you.

“Children and Jesus have many things in similarities. Both are innocent and pure of heart. It really gives me immense joy to see the children display their talents and enjoy the games conducted. Their innocent smiles and greetings are simply priceless. I could see the Christmas spirit when the Santa joined them in dancing and singing.”

Also speaking, the Centennial President of the Benin District Lions Club, Lion Joy Oke-Oghene Okor said she considered it an honour to be decorated as President in the hundredth year of the existence of the international Lions Club. 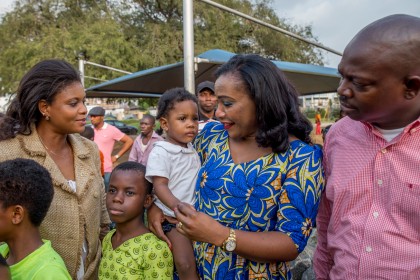 “It is indeed a great honour to be decorated a President in the hundredth year of the existence of our great association. I congratulate your officers and members. What a privilege to serve as a leader in the year of our centennial celebration.”

According to Lion Joy Oke-Oghene Oke, “The Lions Club International is the world’s largest service organization with over one hundred and four million volunteer members in over six thousand, four hundred clubs in over two hundred geographical areas of the world. We are known for service to the less privileged in our communities, protection of our environment and promoting peace of the world. Lions worldwide have demonstrated total commitment to our motto: we serve. That is why we say, in lionism, we serve.”

She said the Club is ready to conquer new frontiers, “We are challenged this year by our new international president, Chancellor Bob Corlew to explore new mountains of service in the areas of youth empowerment, sight preservation, environmental protection, feeding the hungry. We are also challenged to embark on legacy projects and invite more members for greater impact.

“In this very year, I enjoin you all to serve humanity with greater compassion and respect. Congratulations,” she said.

Shortly after her investiture as the centennial president of the Benin District of the Lions Club, Lion Joy Oke-Oghene Okor expressed gratitude to God for the opportunity to serve and pledged her commitment to the Lions Club.

The Club also celebrated with the orphans, the blind and other less privileged children with food and drinks and provided the children with the opportunity to dance with barney, telly-tubbies and they had a lot of fun and excitement.