Custom Intercepts N250 million Worth of Marijuana Meant For Nigeria 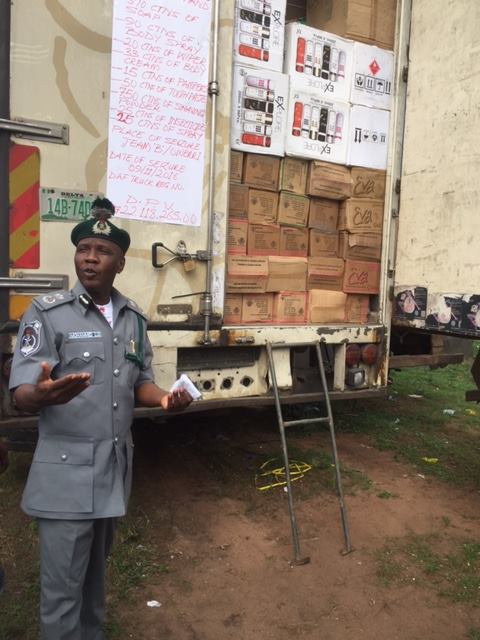 Edike disclosed this on Wednesday in Lagos during his visits to the Murtala Muhammed Airport (MMA) Customs Command, Federal Operations Unit (FOU) Zone “A’’ of Customs and Western Marine Command (WMC) of the service in Lagos.

He attributed the success recorded in making the seizure to the Comptroller-General of Customs (CGC), Retired Col. Hameed Ali, for his amiable leadership and very supportive.

Edike said the comptroller-general had enabled officers to be more focused in eradicating smuggling throughout the country.

He said that the seizure was made along Agbara/Badagry axis by Marine Command, adding that the marine command had so far made seizures valued at N3.35 billion in 2016.

He said that the Duty Paid Value (DPV) of the total seizures recorded was N3.83 billion.

Edike commended controllers in the zone for their brilliant revenue performance, pointing out that the Murtala Muhammad Airport Command generated 50 billion in 11 months.

He applauded all the area controllers and unit heads for their resilience and dedication to duty.

Edike urged the Controller of MMA to triple the revenue target and assist government to accomplish its responsibility.

“We all know that December is a bumper period to generate more revenue to the government.

“The CGC has promised to continue to motivate hard-working officers and controllers.

“We were not able to bring the 1,650 bags because the boat sank while the seven officers leading the seizures also got sunk and were later rescued with the assistance of a Fisher man called Philips Adesina.

“We appreciate the Commodore Simon Dogo of Nigerian Navy for supporting Customs to rescue the seven officers but no suspect was arrested with the seizures,’’ NAN quotes Yusuf as saying.

He said the command also got an intelligence report that some unscrupulous elements were about entering Nigeria with Cannabis from Ghana.

“We swung into action and arrested the boat while the suspects, as usual, jumped into the water to evade arrest.

“This particular seizure made the fourth seizure of cannabis in this year.

At the Murtala Muhammad Airport Command, Comptroller Frank Allanah attributed the huge revenue to the continuous encouraging words of the zonal coordinator of the command.

“We also plead with the management to assist officers of the command being the eyes of the nation, ‘’ NAN quotes frank as saying.

The Area Controller of FOU, Ikeja, Comptroller Mohammed Haruna, said the command had made 250 seizures at various times, adding that the command also generated over N400 million for the government since he resumed duty on Oct, 25.

Haruna said that the command was sure of achieving its mandate that smuggling at both land and sea borders would be brought to be barest minimum.

Edike urged all the commands to support the Nigerian Army, Nigerian Navy, Nigeria Police Force and other sister agencies for continuous support in assisting the Federal Government to block all the revenue leakages across borders.

He urged officers not to relent in inter-agency collaboration, which he said had been yielding more success for customs operations.