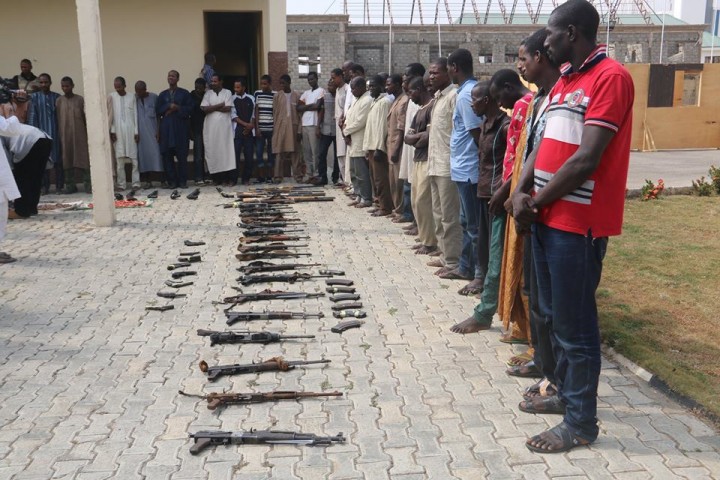 Sources told News Agency of Nigeria (NAN) on Wednesday in Lagos, that the two-man gang stormed Tastee Fried Chicken (TFC) outlet at 22 Road, FESTAC Town and abducted the woman at about 8pm.

NAN gathered that the victim, who was attached to Tincan Command SDV, a bonded terminal of the NCS, was with her two daughters, when the masked men stormed out of their car and picked her up.

One of the victim’s daughters, Faith Alaba, went to social media to announce the abduction of their mother and called on Nigerians and security agents to assist the family to secure her release.

She said: “My mother was kidnapped this evening in front of me and my younger sister in a black Murano jeep.

“We were at TFC at 22 road, FESTAC outside in the car and two men came around.

“My sister ran out of the car. My mother was still screaming and struggling when the other one pointed a gun at me.

“We ran away and by the time we looked back as we were screaming for help, they zoomed off.

“Our mother was taken away in a black Murano Jeep with Teg. No. EPE103CY,” Faith pleaded in her tweeter page.

She said that the two masked men came out of their vehicle with guns and kidnapped his mother.

“I saw them at close range but I won’t be able to recognise them.

“I don’t know if anyone has any grudge against my mum but I am appealing to them to please free her.

“Already, we have notified the police at Area E command, but nothing has been done so far to the best of our knowledge.

“We have not been contacted by the kidnappers. My mother is smallish in stature. She has a gap in her teeth and has a huge birthmark on her arm, which is arrow- like shaped.”

The Customs spokesman in Tincan Island, Uche Ejesieme, a Chief Superintendent of Customs, confirmed the incident.

He said that his office had informed Customs headquarters in Abuja about the development.

“The lady is attached to SDV, one of custom’s bonded terminal under Tincan Island Command.

“The family has reported to the police and the police are investigating with a view to rescue her.”

Lagos Stat Police spokesperson, SP Dolapo Badmos, who also confirmed the incident, said the police are working on her release.