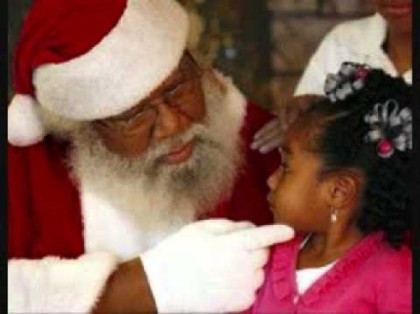 Black Father Christmas playing with a Child(Photo: The Internet)

Here is the famed history of an iconic symbol that accompanies the merriness in Merry Christmas. St. Nicholas is said to have been born of wealthy parents and to have travelled to the Holy Land in his youth. He was tortured and imprisoned during the persecutions of Diocletian, and released when Constantine ordered official toleration of Christians. Nicholas is said to have attended the famous Council of Nicea in 325 (although his name does not appear in the official lists), where he became so infuriated by the heretic Arius that he slapped him hard in the face!

Many of the legends of St. Nicholas involve him helping young people and the poor. In one tale, a butcher lured three boys to his house during a time of famine. While they slept, he killed them, cut them up and placed the pieces in a barrel of salt, intending to sell them for food. Nicholas, who was told of this horrendous act by an angel, hurried to the butcher’s house and restored the boys to life. 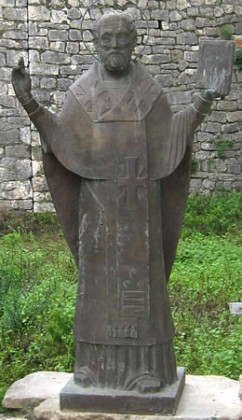 Another popular legend has it that three daughters of a poor merchant were about to be forced into prostitution since they had no marriage dowries, but St. Nicholas saved them from a life of sin by dropping three bags of gold into the merchant’s garden or chimney (versions vary), enabling them to get married.

In the early 1950s, Turks realised that the Bishop of Myra, Saint Nicholas, was none other than the western world’s Santa Claus or Father Christmas. Just as the good saint had brought pilgrims to Myra, and later to Bari, Italy, it was hoped he would again attract tourists and pilgrims with their lira, euros, and dollars.

The first Father Christmas Symposium, held in 1983, has become an annual event, lasting about a week over the 6th of December, St. Nicholas Day. Religious and scientific people come from many countries for the Activities for World Peace with Santa Claus, including the Santa Claus Peace Award. This led to the establishment in 1991 of the Santa Claus Foundation to promote peace, friendship and brotherhood.

The saint was buried in Myra upon his death, and a church may have been built over his tomb soon after. If so, it would have been badly damaged in the earthquake of 529 and repaired along with Myra’s other buildings later in the 6th century under Emperor Justinian. Damaged in the Arab raids of the 7th century, the Church of St. Nicholas of Myra was rebuilt in the 8th century; it is this structure that largely survives today.

After his death, Nicholas became the patron saint of sailors and seafarers, and many pilgrims came to visit his tomb. Over the centuries, the legends and great popularity of St. Nicholas of Myra led to the Christmastime figure of the bearded man who secretly brings toys to children. He is still known as St. Nick in most of Europe (and he brings his gifts on December 6, not Christmas), but in America, he came to be known as Santa Claus.

The church suffered another Arab attack in 1034 and was restored in 1043 by Emperor Constantine IX, at which time a walled monastery was added nearby. In 1087, a group of Italian merchants pushed past the monks and broke open the saint’s sarcophagus. They stole the relics and took them to Bari, Italy, where they were placed in a shrine in the cathedral.

By the middle of the 19th century, the Church of St. Nicholas was in very poor condition. Two attempts by Russian groups to restore it were only partly successful. The bell tower and upper storey were probably added at this time.