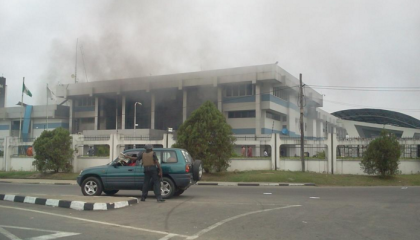 The Cross River Police Command has confirmed three persons dead and 10 in critical condition due to Friday’s gas cylinder explosion at the Central Bank of Nigeria (CBN) in Calabar. Mr John Eluu, the state Police Public Relations Officer (PPRO), disclosed this on Saturday in an interview with the News Agency of Nigeria (NAN).

“We have been monitoring the situation closely and I can confirm to you that three of the victims are dead, while 10 are in critical condition. “Investigation is still ongoing to unravel the cause of the explosion.

“We will continue to monitor the victims as we pray for their survival and quick recovery’’, he said.

“Our men from the Explosive Ordinance Department were on ground at the scene of the accident. “Their investigation shows that it was a gas cylinder explosion from one of the units in the building that caused the blast”, he explained. (NAN)