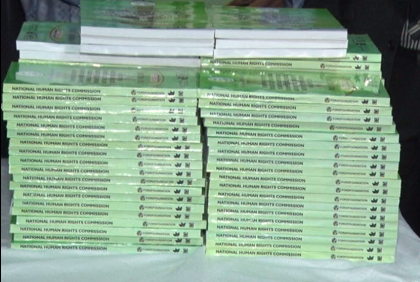 The Electoral Accountability Project organized by the National Human Rights Commission recorded one hundred and eighteen indictments in phase one of its report. The Executive Secretary, Professor Bem Angwe presented the report to the media.

The 284-page report dwelt on review of evidence of gross violations of the  rights of participating governments to public service and to fair trial through the election petition process during the 2007 and 2011 election cycles in Nigeria.
Prof Bem Angwe said the report will be sent to Attorney General of the Federation and state Attorneys General.

“NHRC has seen constituted and inaugurated a special investigation panel to investigate publicly those who have been alleged to have been involved in hate speeches and electoral violence during the 2015 elections and subsequent elections that followed” he said.

Chairman of the occassion Emmanuel Ogbile, Chairman Public Complaints commission and other dignitaries commended the initiative towards ending electoral impunity in Nigeria
The seven man technical working group with it’s chairman , Professor Nsongurua Udombana in its presentation said the initial challenge encountered was having access to comprehensive  election
petition cases.

The project was launched in 2013