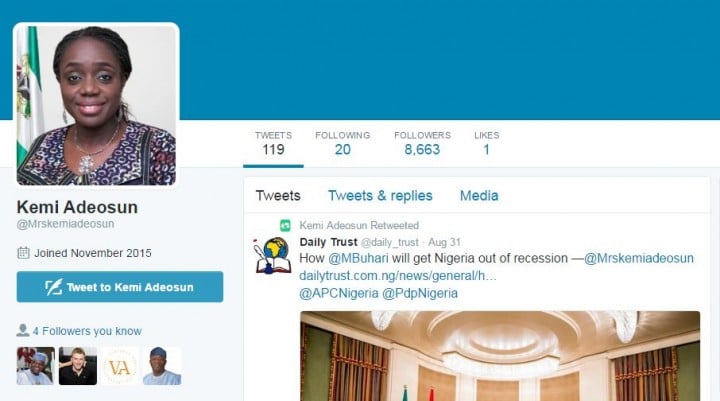 The Minister’s attention was drawn to a fake Twitter handle in her name saying that “recession is just a word.”

This is contained in a statement by the Special Adviser on Media, Mr Festus Akanbi, on Thursday in Abuja.

Akanbi also stated that the Minister’s attention was drawn to a fake Twitter handle in her name saying that “recession is just a word.”

“It is obviously fake and does not represent the views and opinions of the Minister.‎’’

He also said that Adeosun did not make such a statement.

According to Akanbi the Minister addressed the media immediately after Wednesday’s Federal Executive Council and did not make such a statement.

He said that the Minister had consistently demonstrated empathy for the plight of Nigerians hard hit by dwindling oil prices and the impact on the economy.

“This administration is known for integrity and has never hidden the true situation of things from Nigerians, rather it has looked for ways to alleviate the hardships through social intervention programmes.

“We therefore enjoin all well-meaning Nigerians to disregard these spurious allegations against the Minister of Finance.

“We remain committed to reflating and resetting the economy on a path towards sustainable growth,” Akanbi stated