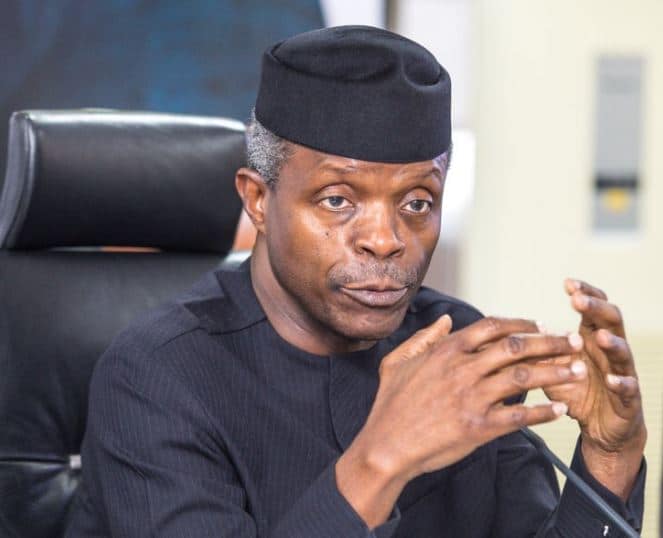 Laolu Akande, Abuja: It is time for the international community to take another look at the international legal instruments and conventions that govern warfare and conflicts in the light of the very unconventional and brutal operations of terrorists and insurgents around the world today.

Acting President Yemi Osinbajo, SAN, expressed this view today during a meeting he hosted with members of the United Nations Security Council who are on a visit to the country.

While assuring that the Nigerian government, will progressively review the rules of engagement, by the military and across the nation’s security system, and take into considerations human rights issues, Prof. Osinbajo added that the Buhari Social Investment Programmes including the Conditional Cash Transfer, the GEEP Micro Credit scheme and the N-Power job programme will cater to the developmental needs of the Northeastern parts of the country affected by the insurgency.

The Acting President disclosed that “we are already disbursing the cash transfers in some IDP camps and host communities,” adding that the Buhari administration is also implementing a microcredit scheme, trying to use the Social Investment Programmes to resuscitate the local economies, including through the Anchor Borrowers’ plan for farmers.

He urged the international community to support the FG in the area of humanitarian response, describing the challenge as “massive.” He disclosed that the government is also in the process of passing a Northeast Development Commission bill, that will deal with some of the long term developmental issues.

The United Nations Security Council members were led by the United Kingdom’s Permanent Representative to the UN, Ambassador Mathew Rycroft, who lead all the five permanent members and the ten non-permanent members of the Council to the presidential villa.

Speaking earlier at the meeting, Ambassador Rycroft praised the Nigerian government for its handling of the humanitarian challenge in the Northeast, and called for a long term developmental outlook in the region, addressing issues of good governance, human rights, women’s participation, economic revival, education and jobs.