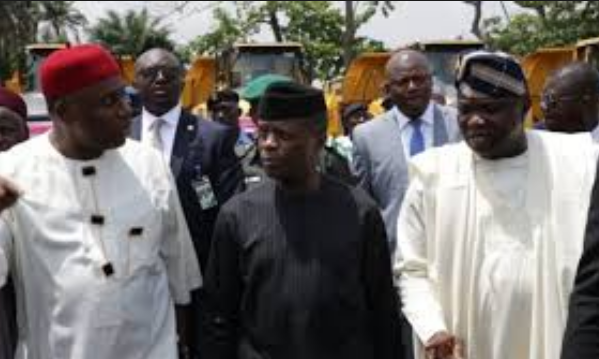 Acting President, Professor Yemi Osinbajo, on Tuesday said that the Federal Government is committed to delivering a fast and efficient rail service system between Lagos and Ibadan within a projected time frame of December 2018.

Osinbajo, who spoke at the Ground Breaking Ceremony of the Segment II Lagos-Ibadan Rail Project with Extension to Lagos Port Complex, Apapa, held at the Nigerian Railway Corporation compound, Ebute-metta, recalled that President Buhari, during his visit to China in January 2016, reopened negotiation on the Chinese support for the project under the Lagos-Kano modernization project.

He said the ground breaking ceremony marked the commencement of the government’s plan to move speedily to improve transport links with Lagos, the national economic nerve centre and major port to other state capital across the country.

“An active and vibrant railway system confers many benefits on the society. Our ultimate goal is to restore a railway using culture for both commercial and personal transportation. We are confident that the national rail project will create up to half a million jobs and facilitate the movement of up to 3.2 million tonnes of cargo per anum.

“It will also reduce the burden on national high ways, thus reducing deterioration of the road networks and increasing the life span of our roads. Railway network will support efforts to diversify the economy and enhance our export potentials. Just as several of our cities became known as railway towns in the past we expect to boost economic activities within the railway lines that will eventually cut across the entire country,” Osinbajo said.