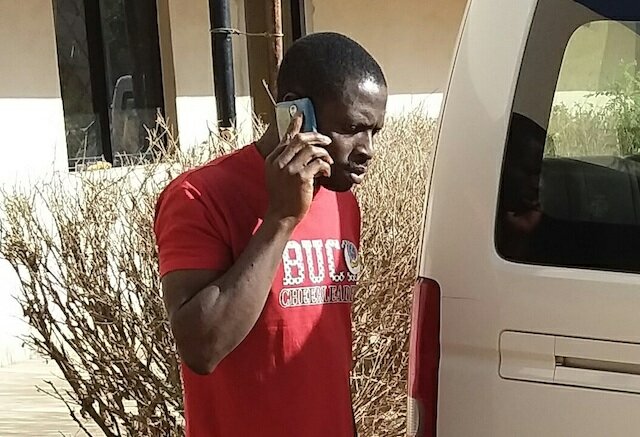 The defendant allegedly impersonated the Special Adviser on Media and Publicity to President Muhammad Buhari, Femi Adesina and attempted to obtain N300,000 from a professor of Economics at Bayero University Kano, Dalhatu Mohammed Galadanci.

According to the complainant, sometime in July 2016, the defendant sent him a text message claiming to be Femi Adesina, S.A to the president on Media and Publicity.

The defendant fraudulently claimed to be speaking on behalf of the president and that the name of the professor has been forwarded for appointment in the presidency.

The complainant further stated that the defendant claimed to be searching for a better office for him. Subsequently, the defendant asked the professor to make payment of the sum of N300,000 (Three Hundred Thousand Naira Only) to facilitate his appointment to Nigeria Port Authority or Nigerian Railway Cooperation and Rural Electrification.

At that point, the professor got suspicious and reported the matter to the commission.

One of the counts read that “ You Christian Efe Oyovweyho alias Femi Adesina and another (now at large) on or about 16th day of July, 2016 at Kano, within the jurisdiction of the Federal High Court Kano with intent to defraud attempted to obtain the sum of N300,000 (Three Hundred Thousand Naira Only) from Professor Dalhatu Mohammed Galadanci through your Zenith Bank Account with Account number: 2173729401, under the false pretence that the money was meant for a juicy appointment in Abuja , which pretence you knew to be false and thereby committed an offense contrary to section 8 (b) of the Advance Fee Fraud and Other Fraud Related Offences Act, 2006 and punishable under section 1 (3) of the same Act.

After listening to the charge, the defendant pleaded not guilty.

Prosecution counsel Musa Isah requested a date for trial in view of the plea of defendant.
Counsel representing the defendant, T.M Oyedema however brought a motion for bail, praying the court to admit his client to bail pending the hearing and determination of the case.

Justice Zainab granted the defendant bail in the sum of N500,000 and two sureties in like sum.

One of the sureties must be a State or Federal government official not below grade level 8.

The other surety must be a respected member of the society with a landed property within the jurisdiction. Also certificate of Occupancy in respect of the landed property shall be deposited with the Deputy Chief Registrar of the court.

The case has been adjourned till 11 April, 2017 for commencement of trial, while the defendant remains in prison custody pending the perfection of his bail conditions.