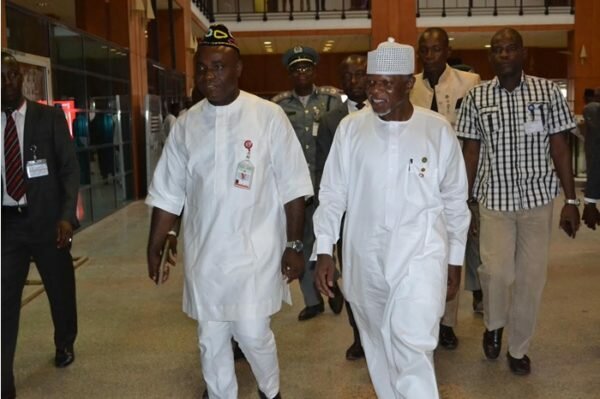 Senators by a voice vote directed him to return to the senate on Wednesday, March 22 in proper uniform designated for the office of Comptroller-General of Nigeria Customs Service.

Shortly before the resolution, some senators expressed concern over Ali’s defiance of the National Assembly by appearing in mufti despite the letter sent to him, specifying that he should appear in uniform.

The Deputy Leader of the Senate, Bala N’Allah said letters were sent to the C-G to appear before the senate to give explanations on the proposed duty payment on vehicles imported into Nigeria.

He further expressed his disappointment with the C-G, who in a response to the invitation letter, said that the National Assembly should not be concerned about whether he wears the uniform, once he performs his duties.

N’Allah said the response was a slap on the Senate, as an institution.

N’Allah who quoted Section 10 of the Nigeria Customs Act, among other sections, said the section was clear about punishment for unlawful behaviour of any officer, “including any person who assumes the name, designation or character of an officer.

“The Act further states that the power to prosecute is that of executive and certain officers including CG has that power.

“This implies that your position is statutory, meaning you must conform to the Act.

“Besides, wearing a uniform is anchored in the Constitution.

He said the senate, as the highest law making institution, would not allow anybody to ridicule it, even though it remains supportive of President Muhammadu Buhari’s good intentions for the country.

Sen. Barau Jibrin(APC-Kano) said there was no need to subject the disobedience of the C-G to a long discussion.

According to him, the house should vote to insist that he goes back and “comply by wearing uniform before appearing here.’’

Sen. Solomon Adeola(APC-Ogun) said it was only proper for the C-G to comply, adding that it was a matter of concern that he was not proud wearing Customs uniform.

“ All other persons that followed him here are fully dressed in the Nigeria Customs uniform.

“With what is happening, anybody can wear anything and present him or herself the Comptroller General. So, I don’t know who is standing here before us.

His car and aircraft carry the official logo of Customs but he wears mufti.

Sen. Ali Wakili said he had met with the C-G before now.

He suggested that since he was not ready to wear a uniform, his title should be changed to “Sole Administrator.’’

He, however, appealed to the senate to allow him and other lawmakers interface with the Ali on the matter.

The Customs boss said the senate letter dated March, 15 did not stipulate he wears a uniform before appearing.

He further said he was already seeking the legal interpretation to the wearing of a uniform.

The Deputy President of the Senate, Ike Ekweremadu, who presided over the plenary said it was proper for the C-G to wear a uniform as a form of motivation for other officers.

He also explained to him, that though the letter dated March 5 did not indicate the wearing of a uniform, the condition was included in previous letters. Ekweremadu said Ali did not have a good excuse to defy the senate.

“Section 2 of the Customs Act defines the officer to include C-G.

“ I believe too that there are certain things officers take for granted which include wearing the uniform. They should learn from you.

“ There is no better teacher than living by example.

“Also, you suspended the vehicle policy. It does not mean you will not come back to it since it is only a suspension.

He said the senate was of the view that he return to the senate in the proper uniform of C-G of Customs.