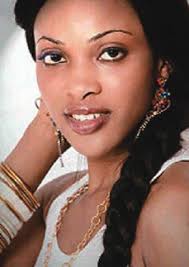 Cynthia Osokogu was a 24-year-old and only daughter of General Frank Osokogu (rtd), she was a boutique store owner and post-graduate student of Nassarawa state university, who was murdered 4 years and 8 months ago at a hotel in Festac town, Lagos state after being lured to Lagos for business purpose then drugged, strangled and robbed of her possession.

However, yesterday at Igbosere High Court in Lagos, Justice Olabisi Akinlade sentenced to death by hanging, two of the four persons accused of killing Cynthia Osokogu.

The accused Okwumo Nwabufo, and Olisaeloka Ezike, the judge ruled, will die by hanging.

Osokogu was murdered on 22 July 2012 at Cosmilla Hotel, Lakeview Estate, Festac Town, Lagos, after she was lured to Lagos by her Facebook lover. 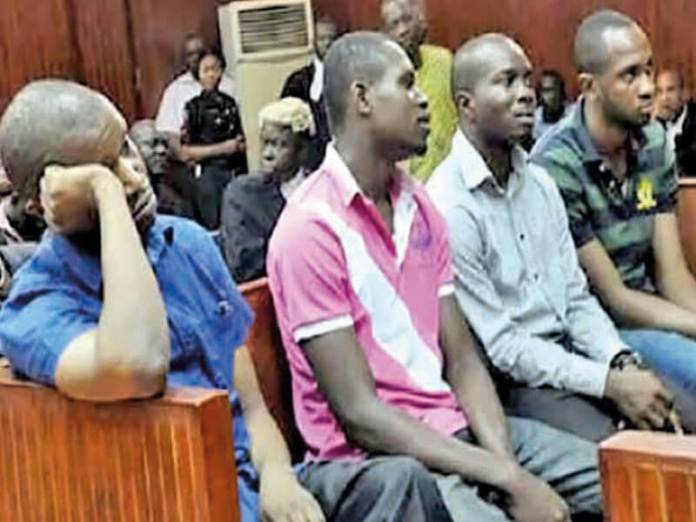 Accused in the murder of Cynthia Osokogu(PHOTO: THISDAY)

The other accused were: Orji Osita, 33, who is a pharmacist and Ezike Nonso, 25. the younger brother of Olisaeloka Ezike. They were, discharged and acquitted by Justice Akinlade.

The investigation into the murder, as reliably gathered by Vanguard Nigeria, revealed that Cynthia was strangled to death in the hotel by her assailants, who thereafter left with an undisclosed amount, her student identity card and phones. The report said the beautiful and vivacious Cynthia had chatted with the two undergraduates on facebook for months. In the process, they reportedly got to know that she owned a boutique in Nasarawa State, following which they reportedly had a business proposal with her, promising to host her whenever she visited Lagos.

On her arrival at the Murtala Muhammed Airport, Ikeja, on July 22, 2012, she was reportedly picked up by the two undergraduates and driven to a hotel in Festac Town. At the hotel, her drink was reportedly drugged before she was strangled to death. Vanguard reliably gathered that after her death, one of her assailants left the room and later put a call to the hoteliers, informing them that there was a corpse in one of the rooms. The hotel, as gathered, took the corpse to the Isolo General Hospital mortuary. Efforts by the hoteliers to contact the family of the deceased proved abortive as there was reportedly nothing to trace her close relatives or friends.

Meanwhile, back in Nasarawa State where her family is said to be based, apprehension had set in following her disappearance. She was, therefore, declared missing, with her pictures dropped at some police divisions in the state. 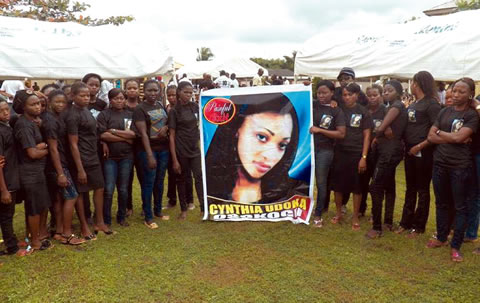 The Nigerian Police after an investigation in July 2012 arrested six persons, among them two university students, a pharmacist and an employee of the hotel where the 24-year-old post-graduate student was murdered.

Nigerian Police revealed after the investigation that the killers deleted all information and chats with the deceased from their facebook. But, along with the line, the deceased phone was dialled and one of the suspects reportedly answered. When the call log was checked from the service provider, the receiver was traced to Festac Town in the Amuwo-Odofin Local Government Area. Again, the Close Circuit Television stationed in the hotel was said to have revealed identities of the killers following which two of them were arrested and their confessional statement led to the arrest of others.

During interrogation, the suspects reportedly confessed to having bought the drugs with which they drugged Cynthia’s drink from a pharmacist, thereby leading to his arrest. It was at this point that her family was reportedly contacted. According to another report from Vanguard Nigeria in 2012, reliably gathered that during the investigation, the two undergraduates confessed to having killed Cynthia. They also reportedly confessed to belonging to a syndicate which specialised in luring unsuspecting rich women with the aim of dispossessing them of their belongings, particularly cash. The late Cynthia, as gathered, was not their first victim, as they were said to have confessed to the police that she was their sixth victim. 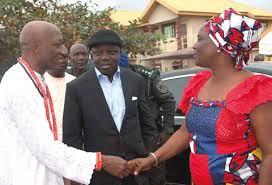 All the accused faced a six-count charge of conspiracy, murder, stealing, recklessness, negligence and possession of stolen goods.

Justice Akinlade found Nwabufo and Olisaeloka guilty of four counts of stealing, murder, conspiracy to steal and conspiracy to murder preferred against them.

Before passing judgment, the judge asked the accused if they had anything to say.

Victor Okpara and Emeka Eze, counsel for the first and second accused, made pleas for mercy.

Okpara said the first accused was a first-time offender and had ” tremendous energy to do something worthwhile with his life. I urge this court to grant him a reformative sentence.”

But in her response, Justice Akinlade said Section 221 of the Criminal Law of Lagos State says clearly that a person who commits murder, shall be sentenced to death.

Akinlade, thereafter, sentenced the duo to death for the second count of murder.

“I pronounce the sentence of this court upon you Nwabufo and Olisaeloka, that both of you be hanged by the neck until you be dead. May God have mercy on you,” Akinlade said.

“In judgment, justice is required not only for the victim but also for the society. In their attempt to steal Cynthia’s property, they stole her life.

“They were not even remorseful. But for the efforts of the police and the Ministry of Justice, we wouldn’t have been able to do anything. This court cannot change the law,” she said.

The judge said that the prosecution proved its case beyond every reasonable doubt by providing all the evidence needed to prove the ingredients of murder and stealing.

She said that the testimony of the ten witnesses was corroboratory.

“The first prosecution witness (PW1) evidence, who was the hotel receptionist corroborated the PW3, the hotel manager’s testimony.

Akinlade said that PW1 told the court that the two accused were seen in the hotel and they lodged in the particular room where the body of Cynthia was found.

The judge, after reviewing all evidence, discharged and acquitted Orji Osita and Nonso Ezike.

Osita, the pharmacist was charged with the offence of selling a drug called Rohypnol which was used in drugging the deceased, Cynthia, without a doctor’s prescription.

The court could not find him guilty because there was no evidence to corroborate the second accused testimony that it was the pharmacist that sold the drug to him.

The court discharged the fourth accused, Nonso, saying that the prosecution could not prove the case of receipt of stolen phones of the deceased.