The Senate on Tuesday deplored an advertorial by Kogi Government that the upper chamber had no role in the ongoing recall process of Sen. Dino Melaye. 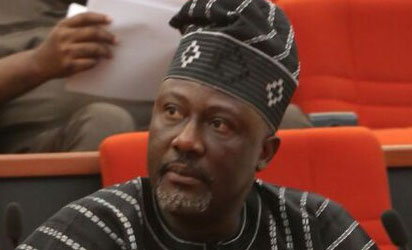 This followed a Point of Order raised by the Deputy President of the Senate, Mr Ike Ekweremadu, at plenary.

Ekweremadu, who based the observation on Order 43 of the Senate Standing Rule, said his attention was drawn to a three-page advertorial by Attorney-General of the state, Mr Ibrahim Muhammed, in a national daily.

He said that in the advertorial, Muhammed faulted his (Deputy President of the Senate’s) statement on the role of the Senate in the recall of a member.

According to him, the Attorney-General’s stand is a display of his ignorance on the provisions of the Constitution on the recall of legislators in the country.

Ekweremadu said that the advertorial was needless as it was a waste of Kogi peoples’ funds.

“The Attorney-General was responding to my contribution on the floor of the Senate when Sen. Dino Melaye informed the house of his constituents’ effort to recall him.

“In my statement, I urged the constituents to apply their time to more useful venture in view of the strenuous nature of recall of a lawmaker in the country and I said the AG may not have advised them properly.

“I understand that every page of the advertorial costs about N700, 000 and I learnt five other papers carried it. We are looking at about N12 million of Kogi Government funds.

“I would have ignored him but because of his statement in the final paragraph of the advertorial, I felt it is necessary to clarify issues,’’ he said.

Ekweremadu, quoted  Muhammed as saying that the Senate had no role in the recall than to “receive the certificate from the Chairman of INEC stating that the provisions of Section 69 of the Constitution has been complied with’’.

“Indeed by the provisions of INEC’s regulation for the recall of a legislator, a legislator stands recalled upon INEC’s confirmation of a majority vote in favour of the recall.’’

The deputy president of Senate said that the Constitution was clear on the role of the Senate in the recall process.

“Section 68(1H) reads, `the President of the Senate or, as the case may be, the Speaker of the House of Representatives, receives a certificate under the hand of the Chairman of the Independent National Electoral Commission, stating that the provisions of section 69 of this Constitution have been complied with in respect of the recall of that member.’

“That was the section the Attorney-General was referring to but he mischievously refused to state the provisions of section 2 or probably out of ignorance, he did not put Section 68(2).’’

He said that the section states that `The President of the Senate or Speaker of House of Representatives, as the case may be, shall give effect to the provisions of subsection (1) of this section.

`So, however, that the President of the Senate or the Speaker of the House of Representatives or a member shall first present evidence satisfactory to the House concerned that any of the provisions of that subsection has become applicable in respect of that member.’

Ekweremadu said, “I don’t know how he came to the conclusion that we don’t have a role. I stand by my position.  I pity the people of Kogi that hired this type Attorney-General.

“It is unfortunate that we are paying a public servant and he is unable to do a simple work of looking at the Constitution.

“Let me emphasise that this section 68(2) is not part of the amendment we made to the Constitution. This has been the original provision of the Constitution, so we did not put it.

“ It has nothing to do with Dino or whosoever. We inherited this provision since 1999. It has been there.’’

The lawmaker expressed concern at the manner in which the Attorney-General of the state had misled the people of Kogi on the recall process, adding that he ought to have consulted properly to avoid embarrassment.

He called for an investigation into the source of money spent on the advertorial and a refund to the state government purse for the payment of workers’ salary.

“For the Attorney-General not to know about it I don’t know where he went to law school, because if he has been properly educated, he would have been conversant with the basic provisions of the Constitution.

“I also don’t know his age at the bar but I believe I am his senior at the bar and I expect him to show some respect to his senior because that is what we were taught at the law school.

“For the avoidance of doubt, I also believe I have better credentials than him in the legal profession. I was a teacher and my interest was Constitutional Law. I also practised law.

“I have a doctorate degree in law and my interest is also Constitutional Law.

“So, I call on the Kogi House of Assembly to institute an inquiry on who paid for this and find a way of getting the money back to pay the salaries of the people of Kogi,’’ Ekweremadu said.

In his remarks, the President of the Senate, Dr Bukola Saraki, said it was unfortunate that the Attorney-General, who should have advised the people properly, was misleading them.

He also expressed concern over the huge amount of money that may have been spent on the advertorial.

“The Deputy President of the Senate came under Order 43 and according to our rules it cannot be further debated.

“But, I am concerned with the calibre of people holding very senior positions in this country.

“ Even those of us who only have association with the legal profession by marriage have learnt over the years to know that this is straight forward.

“What is even more disturbing and irresponsible is how you can spend over N10 million on advertorial.

“This shows that it is government that is truly behind the entire process, when it can go about and take an advertorial on an issue like this.

“There is a need for people appointed or elected to positions to show some level of responsibility,’’ he said.

He expressed disappointment with the position of Muhammed on the matter, adding that “it is very unfortunate for the people of Kogi State.’’ (NAN)