Benue flood: Minister appeals to donor agencies, others for support

The Minister of State for Environment, Mr Ibrahim Jibril, has called on international donor agencies and other philanthropists to support Benue government in tackling the menace of flood in the state. 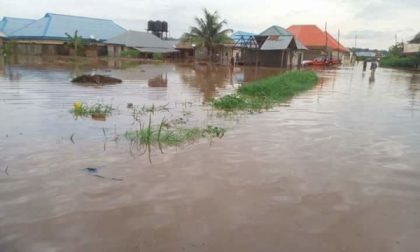 Jibril stated this on Monday in Makurdi while on assessment tour of the flooded areas and some camps for the Internally Displaced Persons (IDPs) in the state.

The minister, who expressed concerns over the level of devastation, said it was beyond the capacity of the state.
He appealed to the International community to assist the state government tackle the disaster.

He attributed the cause of the flood to indiscriminate building on waterways and the blockage of drains which interrupted water flow.

“This situation is devastating; we will seek help from the international agencies for the flood victims in Benue.

“Many people built on water ways and blocked water channels in Makurdi, I have gone round the town and discovered that there are buildings in areas that ordinarily should not harbor them.

“It is not easy for the state government to demolish such buildings but we hope that the people will collaborate with the relevant government agencies to address the issue,” he said.

He reiterated the Federal Government’s resolve to assist the state to overcome the disaster.

Also fielding questions from reporters, the Deputy Governor, Benson Abounu, said the state government was overwhelmed by the flood.

He listed the erosion sites to include Guma, Makurdi, Tarka, Gboko, Obi, Otukpo, Ukum, Kastina -Ala and others.

The News Agency of Nigeria (NAN) reports that the Deputy Governor conducted the minister round the affected areas within the state capital.

NAN also reports that the state government donated over 200 locally fabricated cooking stoves to the IDPs.

Presenting the stoves, the state commissioner for Water Resources and Environment Joseph Utsev, charged the IPDs to make judicious use of the available amenities at the camp.