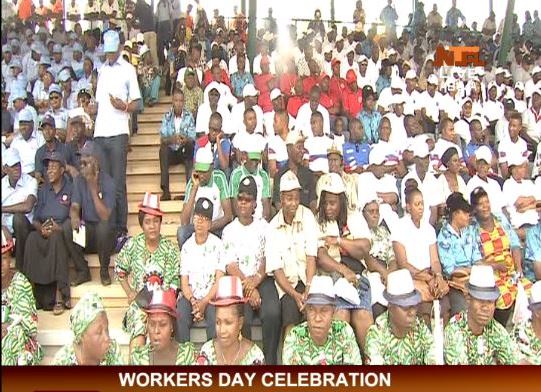 NLC leaders who are members of the tripartite National Minimum Wage Committee are likely to fight for a minimum wage above N56,000.00 if the following statement by the NLC leadership is to go by – Ayuba Wabba said that labour would discuss issues relating to the rate of Naira because the present exchange rate had increased from the time N56,000 was being proposed by labour.

The need to balance the current rate and the rate at the time of proposition of N56,000 as minimum wage will be a huge task to deal with for the new tripartite committee of the Federal Government in arriving at the final amount for the new national minimum wage.

A national minimum wage of N18,000 per month for all establishments in the public and private sectors, employing 50 workers and above was implemented in 2011 under President Umaru Yar’dua.

According to Johnbosco Agbakwuru in a post on Vanguard, as Naira crashed from N155 to the current N360=$1, the purchasing power of N18,000 minimum wage has, now sadly, dwindled to barely $50.00 i.e less than half its former value! Worse still, this value will further diminish, if annual inflation rates between 10-17%, since 2011, are also factored. It is undeniable, therefore, that dependence on N18,000 monthly salary has since shunted millions of Nigerians down the poverty drain.

Thus, in view of the obvious social and economic significance of paying realistic living wages, it would be truly inconceivable, to challenge Labour’s increasing and pressing demand for an urgent significant upward review of the minimum wage to N56, 000/month, (i.e. approximately $150/month with N360=$1 exchange rate) so that the new minimum wage will exceed the $2/day international poverty benchmark.

Although, a monthly income of N56,000 may not provide any surplus, as savings, to acquire a car, let alone a house, nonetheless, the expectation that N56k would triple the present spending capacity of workers and adequately fund several pressing domestic and other existential needs, may regrettably not materialize.

According to Chinyere Bassey of NAN, Labour leaders on Sunday expressed optimism that the Federal Government would give workers a living wage, not minimum wage.

The labour leaders, who are members of the committee, spoke to the News Agency of Nigeria (NAN) in Lagos ahead of the committee inauguration scheduled for Monday in Abuja.

“The Federal Government would give workers a living wage, not minimum wage” – NLC Leaders

Mr Ayuba Wabba, President of the Nigeria Labour Congress (NLC) told NAN that“our expectation is that the demand for labour will be met.

“We will discuss with an open mind to ensure that we achieve our aims and objectives,’’ Wabba said.

He said that the meeting with the tripartite committee would be a social dialogue and collective bargaining discussion.

According to him, the inauguration is long overdue and effort would be made to fast-track negotiations to ensure that workers and pensioners get their accrued benefits.

He said that labour would discuss issues relating to the rate of Naira because the present exchange rate had increased from the time N56,000 was being proposed by labour.

Mr Peter Ozo-Eson, NLC General Secretary, also said that the committee would discuss many issues affecting the minimum wage and the way forward.

According to Ozo-Eson, it is over two years since the organised labour proposed N56,000 as minimum wage to the government; and so will consider a number of socio-economic indices to take its action.

He said that the organised labour was looking forward to the inauguration because the committee was made up of a tripartite group that would discuss issues affecting the Nigerian workers.

“We look forward to the inauguration which I believe will discuss the facts and economic realities when it starts the negotiation.’’