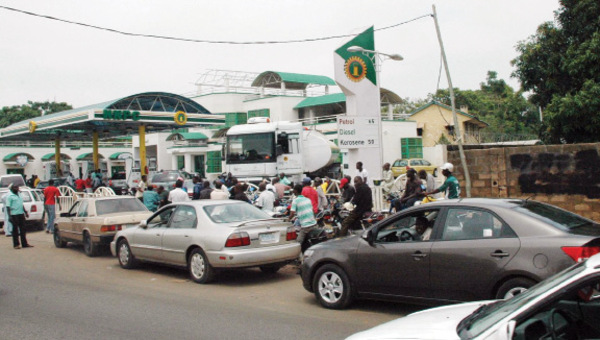 Proposed Strike: “They know the implication of going on strike now” – Baru

Baru made the appeal during the commissioning of the NNPC Ultra-Mega Station in Shagamu, Ogun State.

According to NAN, IPMAN Lagos Chapter on Nov.29 threatened to withdraw its services from Dec. 11 over NNPC’s breach of bulk purchase agreement to sell fuel to them at N133.28k per litre.

The association, in a statement signed by its state Chairman, Alhaji Alanamu Balogun, Vice Chairman, Mr Gbenga Ilupeju and the Secretary, Mr Kunle Oyenuga, said it was set for a showdown with NNPC over irregular fuel supply at Ejigbo satellite depot.

The GMD said that this was not the right time for the independent marketers to embark on strike.

According to the GMD, as the sole importer of petroleum products, the corporation is distributing the products according to Petroleum Products Pricing Regulatory Agency (PPPRA) template of N131 per litre.

He said there was no reason for marketers to sell above the pump price of N145 per litre.

“If some marketers are selling above the approved PPPRA template at depots, we will leave it for relevant regulatory agencies to seal them up.

“They know the implication of going on strike now.

“I will advise them to report any member of Depot and Petroleum Products Marketers Association (DAPMAN) that sells at N141 per litre to relevant regulatory agencies to take action,” he said.

He said the corporation had about 35 million litres of petrol for daily consumption and a reserve of over one billion litres for Christmas and New Year Celebration.

The GMD urged motorists against panic buying, adding that the corporation had what could last for over 30 days in stock.

Baru said the Ultra-Mega station was the first of its kind in the country.

He said the state was the only state in the country with two mega stations.

The GMD said Ogun had always played a major role in the economic development of the nation.

Otunba Gbenga Ashiru, the Ogun Commissioner of Commerce and Industry assured the NNPC boss that state would give adequate protection to the mega station.

Ashiru said Ogun State was one of the safest state in the country.

He said the location of the station on Lagos Ibadan express way was a good one because the road is the busiest in the country.

The Commissioner said the mega station would provide commerce and job for the indigenes of the state.

Mr Adeyemi Adetunji, the Managing Director, NNPC Retail Ltd. said the commissioning marked another milestone in the resolve of the GMD and NNPC top management to increase its footprint in the downstream petroleum industry.

According to him, this will ensure adequate supply of premium petroleum products to the good people of Nigeria.

”We are launching our first Utra-Mega Station within our network which will serve the immediate community and travellers commuting to and from western parts of the country.

“You will agree with me that the commissioning of this station will go a long way in ensuring NNPC Retail Ltd actualizes its mandate.

“The station has 22 nozzles that made up of 14 petrol, four diesel and four for kerosene.

“It is bigger in size than previous stations and designed to serve a larger number of customers,” he said.