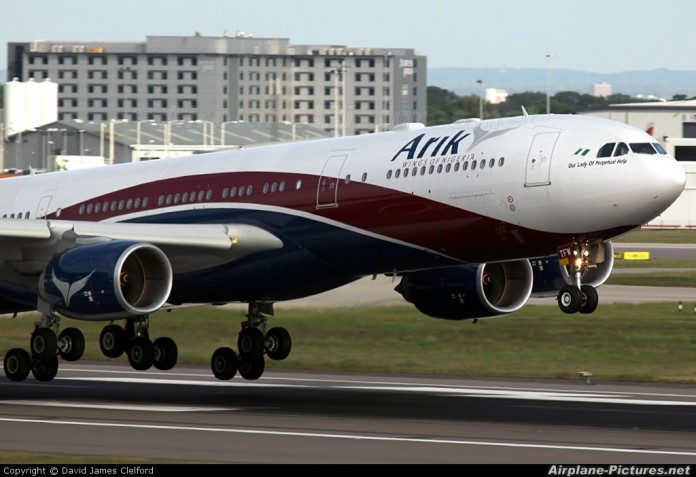 The Federal Government has taken over Arik Airline by appointing an Aviation expert, Roy Ukpebo Ilegbodu, to manage the company under the receivership of Oluseye Opasanya SAN.

The Asset Management Corporation of Nigeria, AMCON, explained that decision to intervene “clearly underscores the government’s commitment to instill sanity in the country’s aviation sector to prevent a major catastrophe”.

The Minister of state for Aviation,
Hadi Sirika, expressed optimism that the development will bring about stability in the airline.

Arik has been experiencing difficulties in recent times. Some of the issues that have plagued the airline include: confiscation of aircraft due to non-payment of leases, frequent flight delays, and constant fracas between its staff and aggrieved passengers.

Sirika said in a statement, “We believe that this appointment is timely and will stabilise the operations of the airline.

“This will enhance the long term economic value of Arik Air and revitalize the airline’s ailing operations as well as sustain safety standards, in view of Arik Air’s pivotal role in the Nigerian aviation sector.”

He also pledged that the Aviation ministry would support the new management of the airline and ensure that all necessary steps are taken to ensure that there would be no undue disruption on Arik’s regular business operations.

It continued in a statement, “From all indications, respite may have come the way of Arik Airlines currently immersed in heavy financial debt burden that is threatening to permanently ground the airline.

“For some time now, the airline, which carries about 55% of the load in the country, has been going through difficult times that are attributable to its bad corporate governance, erratic operational challenges, inability to pay staff salaries and heavy debt burden among other issues, which led to the call for authorities in the country to intervene before Arik goes under like many before it.”

It would be recalled that on Tuesday, some passengers disrupted operations at its headquarters at the Lagos airport.

During the last Yuletide, passengers were stranded in airports all over the country due to cases of flight delays and cancellations by Arik, which negatively affected the preference they enjoy from passengers.

AMCON noted that, “the airline is so overwhelmed to the extent that the worker’s wages are not paid for several months, leading to occasional confrontation between the management of Arik and different Aviation Unions in the country.

“It was Arik’s inability to pay its workers for seven months that forced the United Labour Congress (ULC) and Engineers Union to recently shut the offices of the Airline across the country causing untold hardship to thousands of travelers and an embarrassment to the aviation sector in the country.

“Besides owing workers’ salaries, the Airline has also not been remitting the taxes of workers to relevant bodies thus also defrauding the country. The airline is also in perpetual default in its lease payments and insurance premium, leading to regular and embarrassing repossession of its aircraft by Lessors. Various class actions are pending against the airline all over the world.”