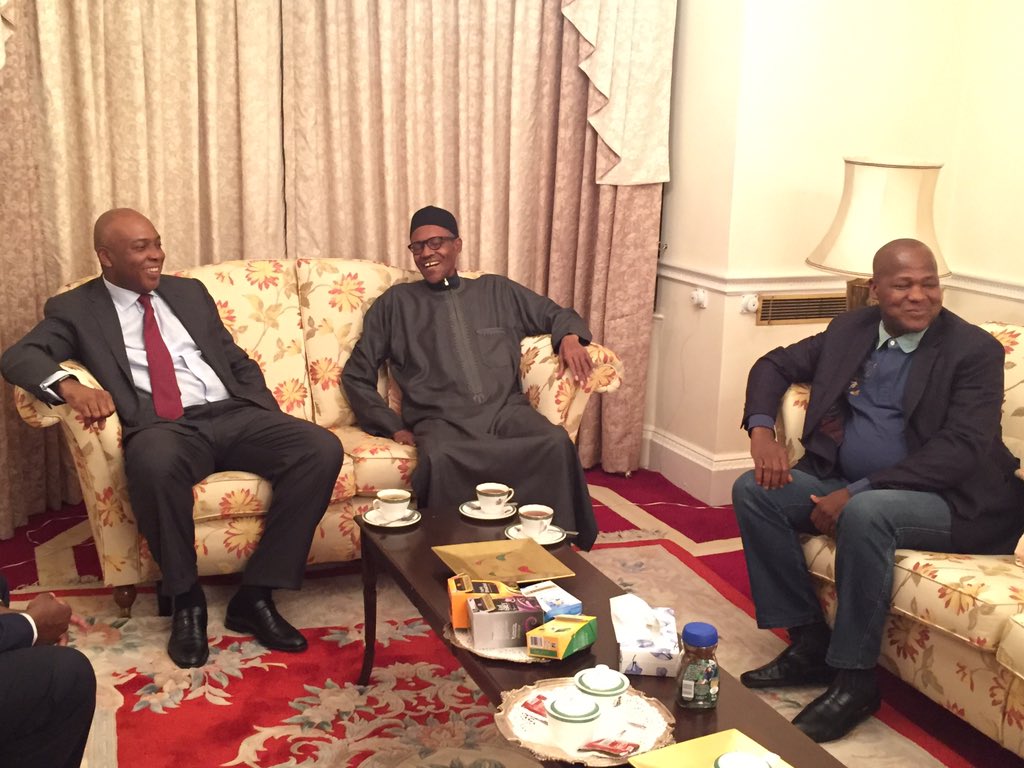 President Buhari thanked them for the  visit and also appreciated prayers from all Nigerians.

“I’m also grateful to Nigerians, Christians and Muslims alike, for their prayers and kind wishes for my health.” He said.

I thanked them for visiting. I’m also grateful to Nigerians, Christians and Muslims alike, for their prayers and kind wishes for my health. pic.twitter.com/pniHAr3cZo

Sources at the National Assembly confirmed with NTA News Correspondent that the Senate President, Sen. Bukola Saraki and the Speaker House of Representative, Hon. Yakubu Dogara will lead a team of Legislators this week to visit President Buhari at the Abuja House, where he is currently on vacation. Special Adviser on Media to Saraki, Mr Yusuph Olaniyonu, confirmed the trip in a telephone interview with NAN correspondent.

Yesterday afternoon, from the United Kingdom at the request of the American President., President Buhari spoke with the President of United States, President Donald Trump on the continuing relationship between the United States and Nigeria on Counter-terrorism and Global Cooperation.

The conversation was cordial and President Buhari congratulated Trump on his election as President of the United States, and on his cabinet.

The two leaders discussed ways to improve cooperation in the fight against terrorism through provision of necessary equipment.

President Trump encouraged President Buhari to keep up the good work he is doing, and also commended him for the efforts made in rescuing 24 of the Chibok Girls and the strides being taken by the Nigerian military.

United States President assured the Nigerian President of US readiness to cut a new deal in helping Nigeria in terms of military weapons to combat terrorism. President Trump also invited President Buhari to Washington at a mutually convenient date.

Last week, President Buhari spoke with the Speaker House of Representative, from the Abuja House in the UK. In Statement released from the Statehouse – President Muhammadu Buhari wrote to the National Assembly, February 5, 2017, informing of his desire to extend his Vacation in order to complete and receive the results of a series of tests recommended by his doctors.

This was made Known in a statement signed by the Special Adviser to the President  on Media and Publicity Femi Adesina Sunday.
The statement say that the President had planned to return to Abuja this evening, but was advised to complete the test cycle before returning. The notice has since been dispatched to the Senate President, and Speaker, House of Representatives.

According to Adesina, the President had planned to return to Abuja Sunday evening, but was advised to complete the test cycle before returning.
“The notice has since been dispatched to the Senate President, and Speaker, House of Representatives”, Adesina said.

While away, the social media have been writing several fictitious stories about the President’s health. Some reports said the President was dead, others said he was in intensive care, while another even said he was stopped from committing suicide.
Government spokesmen have debunked all the fake news and warned Nigerians to desist from being purveyors of falsehood. The President, according to the spokesmen, is hale and hearty and is in UK for routine medical checks.