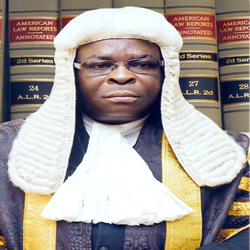 The Senate on Tuesday confirmed receiving a letter from Acting President Yemi Osinbajo, requesting the confirmation of Justice Walter Onnoghen as Chief Justice of Nigeria (CJN).

Senate President Bukola Saraki, read the letter on resumption of plenary after a four-week suspension of sitting.

The Senate had on Feb. 19, adjourned plenary to enable standing committees attend to 2017 budget defence of Ministries, Departments and Agencies.

Saraki said that the letter, dated Feb. 7, urged the Senate to confirm Onnoghen pursuant to Section 231 of the Constitution of the Federal Republic of Nigeria.

“Following the recommendation of the National Judicial Council (NJC), I hereby notify you of the appointment of Hon. Justice Walter Onnoghen as Chief Justice of Nigeria (CJN), “the letter stated.

The president of the senate also read another letter from Osinbajo, requesting the confirmation of Mr Adeyinka Asekan, from Ogun as an additional non-career ambassador designate.

It would be recalled that a Lagos based legal practitioner Chief Malcolm Omirhobo had dragged President Muhammadu Buhari before an Abuja Federal High Court over his refusal to appoint Justice Onnoghen as the Chairman of the National Judicial Council.