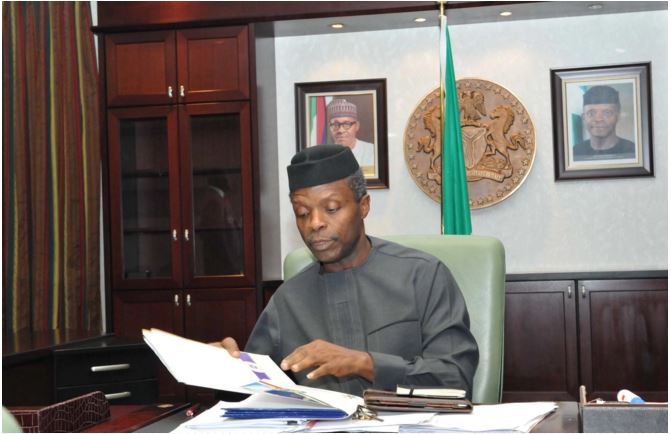 The Acting President, Yemi Osinbajo has withheld assent to four Bills including the National Lottery Amendment Bill 2016. His action promptly triggered reactions in the senate.

Osinbajo, who last week signed seven bills, conveyed his position in a letter to the Senate, read on the floor Wednesday by President of the Senate, Dr Bukola Saraki.

According to the Acting President, he declined to sign the Lottery Bill because of the existence of a pending legal challenge to the competence of the National Assembly to legislate on the subject matter.

The letter reads: “Pursuant to section 58(4) of the constitution, I hereby convey to the senate my decision to withhold assent to the National Lottery Amendment Bill 2016 recently passed by the National Assembly.

“The rationale for withholding assent to the Bill is the existence of a pending legal challenge to the competence of the National Assembly to legislate on the subject matter.

“The rationale for withholding assent to the Bill are the concerns regarding certain words and phrases utilised in the draft Bill that may be inconsistent with the Principal Act. For example section 6 of the Bill with section 21 of the Principal Act and the spirit behind the proposed amendments.”

Others the Acting President said are the Agricultural Credit Guarantee Scheme Fund Amendment Bill 2016 saying the reasons for withholding assent to the Bill are the concerns surrounding board composition, proposals to increase level of un-collateralised loans from N5000 to N250, 000.

The fourth Bill which the Acting President withheld assent to was the Currency Conversion Freezing Orders Amendment Bill 2016.

“The rationale for withholding assent to the Bill is the concern regarding modalities for the communication of asset forfeiture orders,” he said.

In a swift reaction, Sen. Dino Melaye (APC-Kogi) said that democracy was standing on the basic principle of Separation of Powers which stipulated the different functions of the three arms of government.

“The role of the executive is to carry out their fundamental objectives by signing anything that has being passed by this House.

“If withheld, it becomes so dangerous for our democracy and our powers to legislate will be taken away from us as enshrined in chapter four of the constitution.

“So the role of the executive is to assent to any law passed by this House. And anyone who has problem with it can go to court.

“May it not be a pathway for democracy if we keep quiet and allow the power of the legislature to be usurped by the noncompliance to the provisions of the constitution,” he said.

Also speaking, Sen. George Sekibo (PDP-Rivers) said that the National Assembly had power to override the veto of the President.

“The way the constitution is framed, they have their own roles to play, we have our own roles. We check each other.

“The matter is in the court and based on our rule we cannot discuss on it. If it is just that the President did not give assent, we have to look at the merits of the particular Bill if it meets the standard.

“And if the court matter is not going to impede on what we are going to do, then we can override the veto of the President,” he said.

In his remarks, the President of the Senate, Dr Bukola Saraki said that the Senate would refer the matter to its legal department for advice on the interpretations to some of the things.

“It is a matter that we must take seriously because it goes down to the issue of Separation of Powers.”