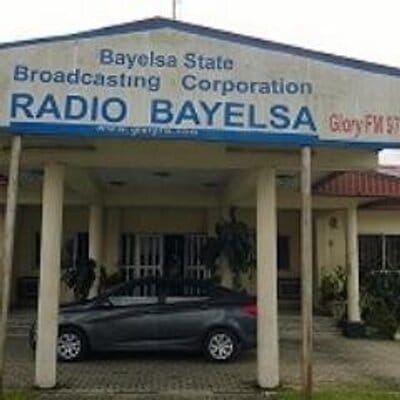 The Radio Bayelsa Chapel of the Nigeria Union of Journalists(NUJ) and Radio Television and Theatre Arts Workers Unions (RATTAWU) consequently shut the radio station. Some reports had said the staffers were whipped by suspected thugs.

Mr Tonye Yemoleigha, NUJ Chairman in Radio Bayelsa told News Agency of Nigeria (NAN) on Thursday in Yenagoa that he and three female staff were caned by the General Manager of the Station, Mr John Idumange.

“Four of us, myself and three female staff were flogged by Idumange himself. The report that it was thugs is inaccurate. It was the General Manager himself. The blisters on the skin are more severe for the ladies.

“We have reported the matter to the Ekeki Police Division and sought medical attention at the Federal Medical Centre, Yenagoa. Workers have been constantly intimidated and threatened for no just cause.

Mr Idumange declined to comment on the allegation that he caned the four members of staff.

Yemoleigha, NUJ Chairman said: “Mr John Angese, Bayelsa Council Chairman of NUJ who is a staff of Radio Bayelsa has also been threatened with a sack, we are all being victimised for insisting that the General Manager complies with Public Service rules.

“We have been under siege since the General Manager was appointed on December 6, 2016. We are not opposed to repositioning the station which is in our interest but we want the procedure to follow due process,” Yemoleigha said.

NAN reports that after the station went off the air, the management mobilised armed security men and few employees who rebuffed the strike to reopen the station.

NAN also reports that the station continued to play music all through as the station’s scheduled programmes and news bulletin could not be aired.

Yemoleigha said that workers of the station are not opposed to staff redeployment.

“But the unions should also be part of the process to ensure that the best hands are not sacrificed on the altar of nepotism, sentiment or witchhunt.

“We are also aware of the alleged over N5 million naira payroll fraud which Idumange claimed to have uncovered and has referred to the Police for investigation.

“Ordinarily, in line with established procedures, an Investigative Panel should have been instituted to look into the matter and come up with a report with which management would act as appropriate.

“All these are expressly spelt out in the Public Service Rules; however, we are requesting a copy of the police report after their investigation.

“We have asked management to properly discipline everyone involved in an established case of running the salary of a staff who resigned with effect from August 2016,” Yemoleigha said

Idumange dismissed the allegations levelled against him. He said that the unions were being used to sabotage his efforts at repositioning the station which was in a deplorable state before his appointment.

He refused to speak on the allegations that he flogged staffers of the station.

He told NAN that there was no going back on his reform efforts as they have received the blessings of the supervising Bayelsa Ministry of Information.

“This small radio station has 346 workers; employment and job placement have never followed due process, we are currently reorganising the place and they are resisting our efforts.

“Those ghost workers must be fished out and the payroll cleaned up.

“The wage bill of the station is N35 million monthly and it is not sustainable. My predecessor incurred a debt of N40 million.

“The unions are being instigated by the Heads of Department affected in the illegal recruitment, and those who came into that place through the back door’’, he said.