Mr Yusuf Salami, Oyo State Sector Commander of the Federal Road Safety Corps (FRSC), on Thursday urged motorists to ensure that they had good wipers and tyres as the rainy season commenced. 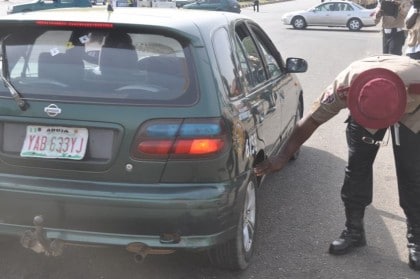 Salami gave the advice on Thursday during an interview with the News Agency of Nigeria (NAN) in Ibadan.

He said that motorists plying the road during rains without good wipers and tyres were endangering their lives and those of other road users.

He said that good wipers would enable clear visibility of the windscreen during the rain, while vehicle with good tyres would grip well whenever the brake was applied during rain.

The sector commander advised motorists to park and wait when they felt that they could not move well due to heavy rain than to continue driving and kill themselves.

Salami condemned a situation whereby parents allowed underage children to drive believing that they were making them comfortable.

“The corps made it clear to parents that they are putting those children to death.

“It is an offence for children below 18 years to drive on Nigerian roads because they lack proper knowledge of the rules and regulations on road usage.

“The corps will continue to check these anomalies and the vehicle of anybody caught will be impounded while the parent of such a child will be invited and fined accordingly.

“ We will also educate such parents on why they should not put the lives of their children in danger because the corps was not interested in the fine but to ensure that lives of road users are safe,’’ Salami said.

The sector commander advised drivers who were in the habit of drinking alcohol while driving to desist from the act, saying the corps had a machine that could easily detect such driver.

He said that vehicle of any driver discovered to have taken alcohol would be impounded to deter the driver from driving while drunk.

“We will let the passengers, if the driver is a transporter, be aware that they are being driven by a drunk as we impound the vehicle.

“If it is in a place that we can call the union, we would call them to bring another vehicle to carry the passengers,’’ Salami said.

He said that the corps had been and would continue to engage in series of public enlightenment and sensitisation campaign in motor parks, market places, Mosques and Churches, among others.

Salami said that the purpose of the campaign was to let the public know why they should abide by the rules and regulations of road usage.

He said that the corps needed collaboration of members of the public and various unions such as the NURTW to educate the road users as the corps could not do it alone. (NAN)

CATEGORIES Domestic
TAGS diversion of funds and money laundering.FRSCgood tyres and wipersNURTWrainy season and road safetyroad maintenance and safetysafety on the roadunderage drivers
Share This