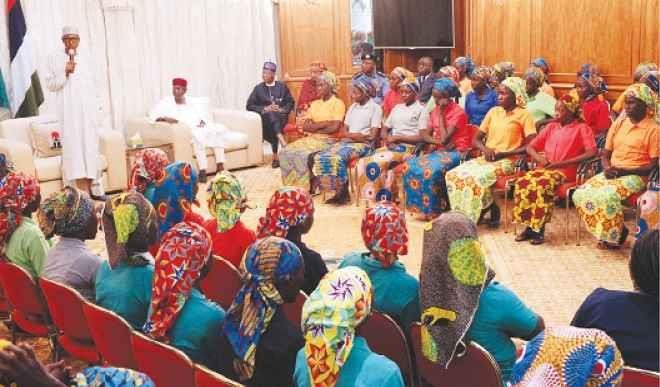 UPDATE: The 82 Chibok Girls will remain with FG Till September

Olasunkanmi Onifade: DSS on Tuesday handed over the recently rescued 82 Chibok Girls to the Ministry of Women Affairs and Social Development for rehabilitation.

The schoolgirls were abducted by Boko Haram terrorists on April 14, 2014, at the Government Girls Secondary School, Chibok in Borno state.

The 82 girls were released after the Federal Government agreed to swap them for some members of the terror group.

21 of the sect of abducted girls were released in October 2016.

Osinbajo said the Buhari administration would do everything possible to ensure that the girls were rehabilitated and reintegrated into society.

“It is the role of government to ensure that you are safe and properly cared for,” he said.

The Director Medical Services, DSS, Dr Anne Okorafor, who handed over the girls to the ministry, said they were medical, psychologically and physically fit.

He said: “All the investigation required has been done and we have treated the girls except for a few of them who require additional follow-up treatment.”

While receiving the girls, the Minister, Sen. Aisha Alhassan, said they would remain under government’s care until September when they would be reintegrated into school at the commencement of the new academic session.

Alhassan also refuted the allegation that the girls were being kept against their wish, saying “government is only trying to ensure that they are well catered for.

‘”Nobody is holding the girls against their wish; these girls have gone through a lot and we need to help them to fit back into the society.

”They have missed a lot and we have brought teachers to help them to catch up with what they have lost while away under captivity; but anyone who wishes to go back is free to do so,” she said.

The Child Protection Specialist of UNICEF, Mr Samuel Manyok, said the organisation was glad to be part of the stakeholders involved in providing the girls with necessary rehabilitation.

According to Manyok, his organisation looks forward to closer relationship with all stakeholders in rehabilitating the girls.

On his part, the Deputy Representative of UNFPA, Dr Eugene Kongnyuy said the handover was a new chapter for the girls.

NEWER POSTJonathan’s Cousin, Azibaola, Challenges EFCC, Alleges Breach of Fundamental Rights
OLDER POSTDonald Duke: “I do not have the flair for the legislature … but the presidency”