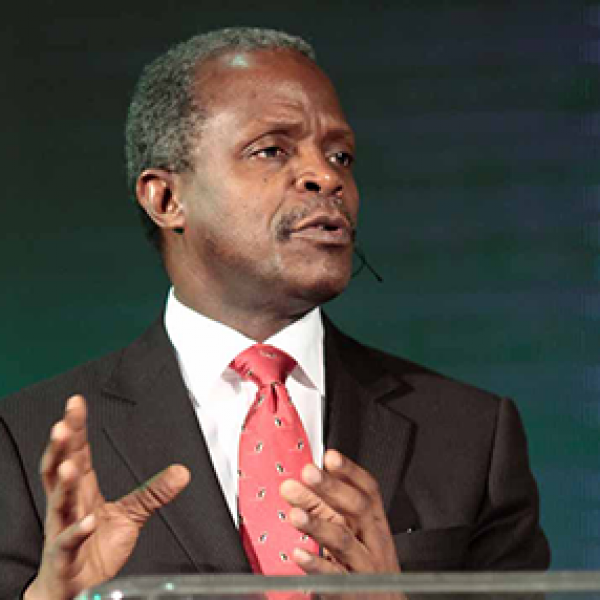 Why Buhari Administration is Promoting A New Vision For Niger Delta, by Acting President

Abuja: Laolu Akande, the Senior Special Assistant on Media & Publicity to the Acting President says “we’ll finish whatever we start”

The Buhari administration is promoting a new way of thinking and engagement that will secure the development of the Niger Delta and the entire country, according to Acting President Yemi Osinbajo, SAN.

That new approach, which he restated as the New Vision, according to him involves an active and effective collaboration between the government, the private sector and the communities. This approach he stated ensures that “we finish whatever we start.”

Prof. Osinbajo spoke earlier today while meeting with members of a delegation from Bayelsa State regarding the $3.6B Brass Fertilizer & Petro-Chemical Company that is expected to come on steam soon. The delegation which included executives of the company was led by Governor Seriake Dickson.

Lamenting that only 12% completion rate was recorded in several of the projects undertaken by the Niger Delta Development Commission in the past years, while the rest were abandoned, Osinbajo stated that “sometimes projects are designed not to succeed, but just for some people to make money.”
He however noted that “a new way of thinking is emerging,” pointing to effective collaboration with the private sector and citing the example of the NLNG as one instance of such effective collaborations.

“The Buhari administration, this government is committed to finishing whatever we start. At the end of the day, we shall ensure that,” he affirmed, adding that the oil-producing communities have tremendous potentials.

While commending the Bayelsa State Governor for his proactive efforts, the Acting President commended the collaboration that is ongoing regarding the Brass company. Said he: “this is what we describe as the New Vision: partnership between the Federal Government, the States, the communities and the private sector. This is the new way of thinking that is emerging, the New Vision.”

In his own comments, the Minister of State for Petroleum Resources, Dr. Ibe Kachikwu described the idea of the Brass Fertilizer & Petro-Chemical firm as “a game changer that we need to encourage, “ adding that such ideas have the potential to change the economic model in the Niger Delta.
The Acting President also received a delegation from the Seed Entrepreneurs Association of Nigeria, SEEDAN led by its President Mr. Richard Olafare and the Director-General of the National Agricultural Seed Council, Dr. P.O.Ojo.

In his remarks, Prof. Osinbajo assured the delegation that the Federal Government would do much more in the area of Agriculture, stressing that fertilizer and seed inputs are vital for the “agricultural revolution” that the Buhari administration is delivering.