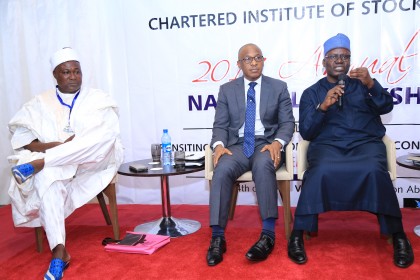 Public listings remain a strategic objective of the reform and privatisation programme of the Federal Government, according to Director General of the Bureau of Public Enterprises (BPE), Mr. Alex A. Okoh.

To achieve that, Okoh explained that the Bureau would henceforth ensure that the right core investors with the financial, technical and managerial competences are selected to ensure that they are capable of moving privatised entities to the desired level in order to make them attractive for public listings.

In a paper titled: Creating An Enabling Environment For Public Listings Of The Economy’s Commanding Heights: The Case For Telecommunications & Energy Sectors which he presented  at the 2017 annual national workshop of the Chartered Institute of Stockbrokers in Abuja on Tuesday, July 4, 2017, the BPE helmsman also said the privatisation agency would  develop policies to attract additional private sector capital into the privatized companies “which will eventually give confidence to the business and encourage listing”.

He noted that the BPE would also ensure that technical partners are retained in the privatized enterprises over a long term and that there would be continued engagement with the relevant authorities to seek certain waivers where required to make public listings more easily achievable for the privatized entities.

Okoh called for the establishment of an institutional framework to reach targets in both public and private sectors and to identify quick wins, medium term goals, long term achievements.

The DG informed that the Bureau was also undertaking a quick assessment of privatized enterprises, especially in the petro-chemical sector with a view to divesting the Federal Government shares through the capital market. “The BPE is working with core investors in certain privatised  enterprises sold by deferred public offering to ensure that they sell at least 20% of such entities to the market via public listing”, he added.

Also speaking at the event, a former Director-General of the BPE, Mr. Benjamin Ezra Dikki, called on the Securities and Exchange Commission (SEC) and the Nigerian Stock Exchange (NSE) to set up a committee to induce the telecommunications companies in the country to go to the capital market.