The Supreme Court on Wednesday adjourned indefinitely hearing of a Federal Government’s appeal against the decision of the Court of Appeal, Abuja to strike out some charges brought against Senate President Bukola Saraki. 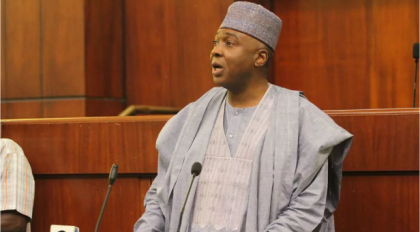 Justice Tanko Mohammed who led the panel of justices expressed disgust on the nonchalant manner in which Mr Rotimi Jacobs (SAN), Counsel to the applicant and respondent had filed the process.

“The court is disappointed that a high profile lawyer could file such an incompetent application knowing what the extant rules of the court are’’, he said.

The counsel’s effort to pacify the situation failed as the court insisted that the application was incompetent and could be heard as presently constituted.

Jacobs had eventually apologized and prayed the court to avail him another chance to file the necessary affidavits with the exhibits.

Mohammed thereafter gave him 24 hours to file the correct affidavits with the exhibits.

The court then went ahead to adjourn hearing in the appeal indefinitely stating that the counsel on both sides would be communicated on the next hearing date.

Jacobs had a three-in-one application challenging the ruling of the CCT and the Court of Appeal but failed to accompany appropriate exhibits of the two lower courts with the process.

Jacobs had insisted that the decision of the lower court to strike out the three count charges out of the 18 was an error.

The Appeal Court had on Dec.12, 2017 partially upturned Saraki’s acquittal by the Code of Conduct Tribunal.

The three-man panel led by Justice Tinuade Akomolafe-Wilson unanimously ruled that the Senate President return to the CCT to face trial on three counts out of the 18 initially slammed on him.

The court dismissed the remaining 15 counts and ordered that the three charges be sent back to the CCT for continuation of the trial.

Saraki, who is also appellant at the apex court is seeking the setting aside that part of the Court of Appeal decision which ordered him to defend three out of the 18 count charges. (NAN)