No need for data capturing to renew driving licence—FRSC

The Federal Road Safety Corps (FRSC) has said that there is no need for data capturing while applying for renewal of driver’s licence. 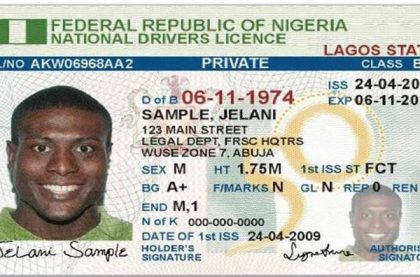 Mr Hyginus Omeje, the FRSC Lagos State Sector Commander said this in an interview with the News Agency of Nigeria (NAN) on Saturday, adding that the agency departed from the old system long time ago.

” I want to use this opportunity to tell motorists that they can renew their licence without going through capture.

“The choice of coming to capture is yours, as long as we have your data base at the initial stage and its already in the system, you don’t really need to be captured any longer,” he said.

Omeje said that there is provision to bypass capture in the new process of renewal of licence.

The FRSC boss however, noted that recapturing of data would only happen when people want to change their passport photographs or change some variables stated at the initial stage in the data.

” The whole essence of renewal is to update your records. You might have changed your residential address and all other variables except date of birth which is constant.

“And it is possible that somewhere somehow you had an accident that has given you mark or scars on your face, that has not been there before and if you don’t do the update, of not going for capture, you may be embarrassed when you go to the embassy,” Omeje noted.

He also advised motorists to go to their various centres for collection of their drivers licences.

NAN reports that over 55,000 motorists were yet to collect their processed drivers’ licences at various designated centres in Lagos state.

The sector commander had said in October, that about 55,412 processed drivers’ licences were ready and waiting for collection by their owners at the various designated centres in the state.

According to him, there are no backlogs on the issuance of drivers’ licences again in the Lagos state.

“We have 55,412 uncollected licences across our stations in Lagos state.

“It is unfortunate that people do not come to collect their licences.

“The only challenge we are facing now is the collection of these licences because we have so many of them in our various centres.

“Not because they have not been produced but the applicants are not coming to collect them,” he said.

The sector commander appealed to the motorists, who have applied for drivers’ licence to visit the centres and collect their licenses before the expiration date.

Omeje said that Lagos command had established some dedicated numbers for whomever has any complaint concerning either delay in issuance or collection of the licences.

According to Omeje, 08150654567 is the number to call by any applicant in case there is a delay in issuance of the driver licences .

He said that the numbers were created solely for the purpose of attending to issues related to licence.

The sector commander noted that drivers could now renew their licences for N10,350 for a five-year duration while three-years licence costs N6,350. (NAN)