The Federal High Court, Abuja, has restrained the House of Representatives from conducting the planned public hearing on the Hijab wearing controversy between the Nigerian Law School and Ms Firdrusa Abdulsalam.

Justice Anwuli Chikere gave the order on Wednesday in her ruling on an application filed by a collation of legal practitioners, seeking to stop the public hearing. 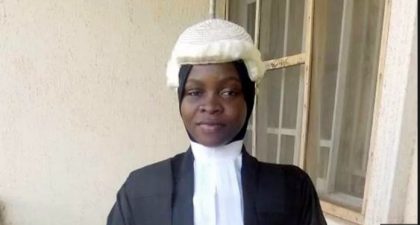 The judge ordered that the public hearing be put on hold, pending the determination of the substantive suit.

Chikere, in her ruling, said that the plaintiffs, who are legal practitioners, had a right to bring the action since the decision of the House of Representatives would affect them.

She adjourned the matter until April 24 for hearing of the substantive suit.

It will be recalled that Abdulsalam, a law graduate, was on Dec. 13, 2017 not called to the Nigerian Bar on the grounds that she wore a Hijab to the call to bar ceremony.

The matter was taken to the House of Representatives and a public hearing was fixed in respect to the matter on Feb. 6.

The lawyers, under the aegis, Coalition of Lawyers for the Preservation of Legal Practitioners’ Ethics, then filed a suit asking the court to stop the House of Representative from conducting the hearing.

Their counsel, Mr Sunday Akanni, told the court that the lawyers had even undertaken that they would pay damages to the House of Representatives in case their application was found to be frivolous.

He said they were seeking the interpretation of Sections 33 to 45 of the 1999 Constitution as well as Section 88.

“We brought the House of Representatives to court because of the public hearing they scheduled to hold Feb. 6.

“Our contention is very simple, the public hearing notice they sent is in respect of a lady called Abdulsalam Firdrusa, who was not called to the bar on Dec. 13, 2017, because she was wearing Hijab.

“They say the public hearing is pursuant to Section 45 of the Constitution, but we are saying it has to do with violation of rights and it is the court that can look into such matters.

“If that right is breached, where are you supposed to go, public hearing or court?”(NAN)