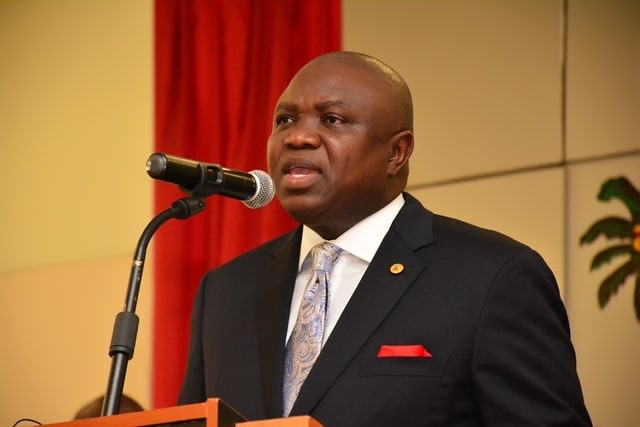 Governor Akinwunmi Ambode of Lagos on Tuesday said the state would by 2025 be Africa’s model megacity, a global, economic and financial hub that is safe, secure, functional and productive.

He also said that almost half of the Lagos state’s Internally Generated Revenue is used for the payment of salaries, including pensions and gratuities.

He said that as a result, the government is expected to explore the economic potentials of the State to meet the needs of the citizenry.

The governor made the submission on Tuesday at the gathering of captains of industry and top government officials at a programme, “LagosMeansBusiness’’

This event presents a platform for all concerned stakeholders to chat a path for the future of Lagos without any sentiment.

“This administration has decided to focus on three key areas of Power, Education and transport as a way of affecting other sectors of the society indirectly.

“ The challenges of Lagos is enormous and it demands a strategic and proactive approach.’’

Lagos, he said needs structured corporate social responsibility targeted at initiatives that would be mutually beneficial to private sector and government.

The government, he said, would continue to support private sector and pleaded: “We are not true citizens until we become responsible tax payers.”

Ambode assures every Lagos resident that he would make their taxes work for them with a transparent and incorruptible government with good value for taxes paid.

He said that taxable adult in Lagos are eight million out of which only 700,000 pay taxes.

We will tax those who are rich so as to protect them. That is what property tax which law was enacted in 2002 is saying.

After 17 years, the law had not been reviewed.