Dana Air on Thursday promised to cooperate with the Federal Government’s probe panel for a comprehensive audit of the airline’s personnel, operations and technical capacity. 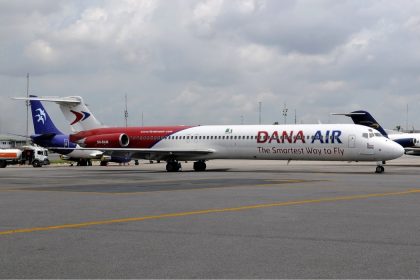 The News Agency of Nigeria (NAN) reports that the airline’s Communications Manager, Mr Kingsley Ezenwa, gave the assurance in a statement issued in Lagos.

NAN reports that following two near mishaps suffered recently by Dana Airline aircraft, the Federal Government on Wednesday ordered a comprehensive audit of its personnel, operations and technical capacity.

This followed consideration of a preliminary report submitted to the Federal Executive Council (FEC) by Minister of State for Aviation, Sen. Hadi Sirika.

Ezenwa said: “We, therefore, welcome the recent audit ordered by the Federal Government and are willing to work with the team to demonstrate our commitment, not just to flying, but to flying safe.

“Our route and fleet expansion programme is still very much on course, and we remain dedicated to our recent partnership with Asky Airline, another formidable airline in Africa.

“We wish to thank the Minister of State for Aviation, Hadi Sirika, who has proven himself as a technocrat, and our esteemed guests for keeping faith with us while the incident was under investigation.”

He also lauded the Accident Investigation Bureau (AIB) for the prompt release of the preliminary report on the Port Harcourt runway incident involving Dana Air aircraft.

“Excerpts of the reports confirmed that the Air Traffic Control, an arm of the Nigerian Airspace Management Agency that is saddled with the responsibility of issuing instructions which pilots are required to obey, had cleared the pilot in command to land.

“It is pertinent to note that the pilot of that flight is a happily married man and a proud father of three beautiful children.

“He has over 30 years’ experience in the aviation industry and is one of the very best in his profession, meticulous in his duties and headhunted from another domestic airline where he also served as the head of safety and quality standards,” Ezenwa said.

He said that considering the safety measures that Dana Air had put in place and its huge investment in training and re-training of crew, the airline would wait for the AIB report.#

According to him, the Nigerian Civil Aviation Authority (NCAA) and its foreign partners, the Flight Safety Group, carried out an audit on Dana Air operations in 2013.

Ezenwa said that, as a result of the airline’s commitment to global safety standards, it applied to become a member of the International Air Transport Association (IATA) in 2016.

He noted that the airline went through the IATA audit and subsequently became a member in 2016. (NAN)