The Kogi High Court sitting in Lokoja on Friday varied a Senior Magistrate Court’s order and remanded Sen. Dino Melaye at the National Hospital, Abuja under the custody and supervision of the police. 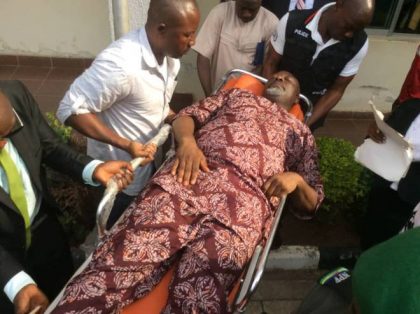 The Chief Judge of Kogi State, Justice Nasir Ajanah gave the interim order in his ruling on two motions filed by the prosecution and the defendant challenging the ruling on Friday in Lokoja.

The News Agency of Nigeria (NAN) reports that the two separate motions urged the court to vary the May 3, Lokoja Senior Magistrate Court’s ruling , which ordred the remand of the embattled senator in police custody.

The prosecution, led by Theophilus Oteme Esq, the officer in charge of legal unit, Kogi police command, in its motion sought that the lower court ruling be varied and the defendant be remanded in prison custody as originally sought.

The other motion filed by defence, led by Chief Mike Ozekhome (SAN), applied for the granting of bail to the Senator and as well urged the court to order that he (Melaye) be remanded at the National Hospital, Abuja in view his health challenges.

Arguing the motion Ozekhome prayed the court, to in the interest of justice, abridge the time both motions would be taken because of the critical health condition of the defendant applicant.

“He was taken to the lower court yesterday on a stretcher and as we speak, he is still on the stretcher,” he said.

Ozekhome said that the life of the applicant was in danger since the police in the state had no medical facility to take care of him while in their custody.

The Chief Judge, in his ruling on the applications, said that while both parties were on the same page in their call for variation their destinations on the issue of bail were different.

Ajanah said he was inclined to grant the prayers of the two parties in which they sought variation of the court order on the custody of the senator.

He, however, conceded that it was only a fit person that could stand trial, saying, “infact, that is why it is called, Standing Trial.

“In the circumstance therefore, I hereby vary the order of the remand of the third defendant as made by the lead counsel.

“I hereby order that the third defendant be kept at the National Hospital, Abuja under the custody and close watch and supervision of the complainant, the Inspector General of Police.

“The application for the bail in this case will be heard on Monday, the 7th of May, 2018”, Ajanah declared.

NAN recalls that Melaye was on Thursday remanded into police custody until June 11, by Mr Sulyman Abdullah of the Lokoja Senior Magistrate Court.

The senator was arraigned along with Kabiru Seidu, aka Osama, and Nuhu Salihu, aka Small.

They were charged with criminal conspiracy, illegal possession of firearms and illegal gun dealing contrary to various sections of the appropriate laws. (NAN)