The Joint Health Sector Union (JOHESU) says the Minister of Health, Prof. Isaac Adewole, has constituted himself as a major hindrance to fruitful deliberations towards ending their strike. 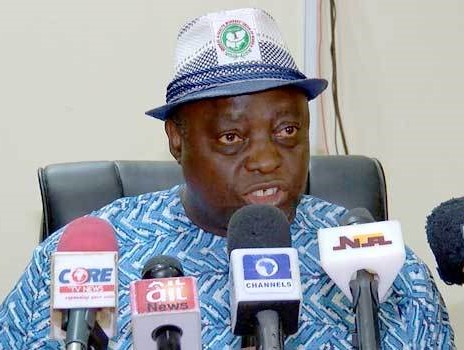 Mr Josiah Biobelemoye, Chairman of the union, said this in a statement made available to the News Agency of Nigeria (NAN) on Friday in Abuja.
“The Federal Ministry of Health presently led by Prof. Isaac Adewole has constituted itself as a major hindrance to fruitful deliberation as he has never disguised his intention to symbolise the propaganda machine of the Nigerian Medical Associations (NMA) through his posturing at all our meetings.
“This posture has necessitated JOHESU to take a position that the negotiations were structured to fail ab-initio,’’ the statement read in part.

He noted that Adewole’s insistence that the wage structure in the health sector must reckon with what was obtainable in 1991 by late Prof. Olukoye Ransome, which has to do with dual salary system (MSS and HSS).
According to him, that salary system marked the beginning of persistent acrimony until it was corrected through the Harmonised Tertiary Institutions Salary Structure (HATISS) and HAPSS in 2003.

“It has become necessary to reach out to the Federal Government, consumers of health and all stakeholders with regards to the on-going nationwide strike by health workers,” he said.
Biobelemoye recalled series of meetings held this year on April 25 and 30; as well as on May 9, 15 and 16, respectively, between the union and Federal Government team comprising of Ministers of Health, Labour and Productivity, and Office of Secretary to the Government of the Federation.
Others included the Office of Head of Civil Service of the Federation, Federal Ministry of Finance and DSS.
He accused the ministers of labour and health, both members of NMA, for taking a position that parity must entail a basic salary differential in the emolument of health professionals and their doctor colleagues.
“On May 15, 2018, JOHESU came up with a comprehensive presentation to graphically showcase the realities of the various salary scales in the Health Sector from 1977 till date.

“Even when the reality on the ground shows that a fresh doctor presently enters the public service on CONMESS 3 which is the equivalent of Grade Level 13 with take home monthly package of N313,000.00 per month,
“the closest in line who are health professionals enter public service on CONHESS 9, which is equivalent to GL 10.
“With a package of N161,670.00 with a proposal to have an adjustment that takes him to a total emolument of N190,000.00.
“The two ministers who are members of NMA have taken positions that these health professionals seek parity with doctors. In mathematical terms, this is a significant 61 percent differential.
“At same CONMESS 3, which is an equivalent of CONHESS 11, in our adjusted CONHESS, a medical doctor on CONMESS 3 will earn N312,944.83 while other health professionals will earn N223,345.58. This is a difference of N89,599.22 translating to 40 percent,’’ he said.
Biobelemoye noted that at peak levels a consultant doctor on CONHESS 7 takes home at least N1 million, while other health professionals at the same peak level of CONHESS 15 are presently on N477,165.

However, he said the union was only seeking for a proposed adjustment that would take them to N697,000.
He further noted the present monthly entitlement or salary of administrators and graduate nurses who start on CONHESS 7 (GL 8) as ranging between N89,000 and N118,000, respectively.

According to him, it will take any other average health professional or administrator a minimum of 15 years to earn what the doctors are collecting. Meanwhile, the two ministers and their ministries are yet to react to the accusation of bias in resolving the protracted industrial action embarked upon by JOHESU on April 17. (NAN)