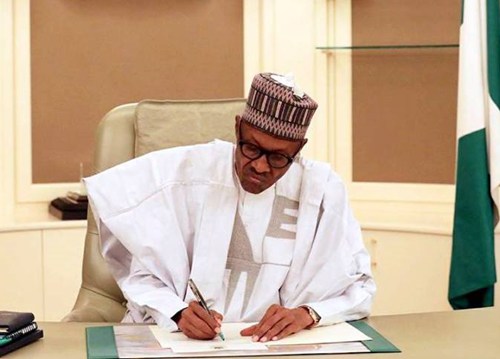 Musiliu Smith, a former inspector-general of police, and Clara Bata Ogunbiyi, a former justice of the Supreme Court, have been named by President Muhammadu Buhari into the Police Service Commission (PSC) as members.

Smith will serve as chairman. If he gets the nod of the Senate, he will replace Sir Mike Okiro, also a former inspector-general of police.

On Thursday, Senate President Bukola Saraki read Buhari’s letter seeking the confirmation of Smith’s appointment and those of three others.

The president based his request on sections 153 (1) and 154(1) of the constitution as amended.

“In compliance with the provisions of section 153 (1) and 154(1) of the 1999 constitution of the Federal Republic of Nigeria, as amended, I write to forward for confirmation by the Senate the listed names as the chairman and members of Police Service Commission (PSC). I attach here, with their CVs,” the president’s letter read.

“In anticipation of the early consideration and confirmation of the above appointments by the distinguished senators, please accept, Mr Senate president, the assurance of my highest consideration.”

Smith became Police IG in the first term of President Olusegun Obasanjo. He was swept out of office by the first strike by policemen.

He was born in Lagos on 17 April 1946. He completed secondary education at Ansarudeen College, Isolo, Lagos and went to the University of Lagos where he obtained a B.Sc in Sociology in 1970.

Smith joined the police force in 1972 in Enugu as an Assistant Police Superintendent.

He later served as an Instructor in the Police College Ikeja, and a Divisional Police Officer in Mubi, Adamawa State.

From 1980 to 1982, he was in charge of the X-Squad at CID Alagbon Close, Ikoyi. He was moved to Ilorin where he served in various capacities, finally becoming Kwara State Police Command Administrative Officer.

He was posted to Rivers State in 1987, taking charge of the Police College. In 1988, he was promoted Commissioner of Police and moved to Lagos where he took over control of the Criminal Intelligence Divisional Force. He returned to Kwara State and later Plateau State as Commissioner of Police.

In 1996, Musiliu Smith was promoted to Assistant Inspector General of Police, placed in charge of Zonal Headquarters, Kano.

He completed a master’s degree programme in Strategic Studies at the University of Ibadan in 1997. He was appointed a member of the Provisional Ruling Council in 1998.

Former Justice Clara Bata Ogunbiyi, a member of the commission born on February 27, 1948, at Lassa, a town in Borno State, Northeastern Nigeria. She obtained a bachelor’s degree in Law from Ahmadu Bello University in June 1975 and was called to the Nigerian bar in 1976.

Clara began her law career in Maiduguri in 1971, after obtaining a certificate in law from ABU, before she went for the full LLB.