The Abuja Electricity Distribution Company (AEDC), is to begin the deployment of 222,728 meters valued at about N10 billion for customers in its franchise areas of FCT, Kogi, Niger and Nasarawa States. 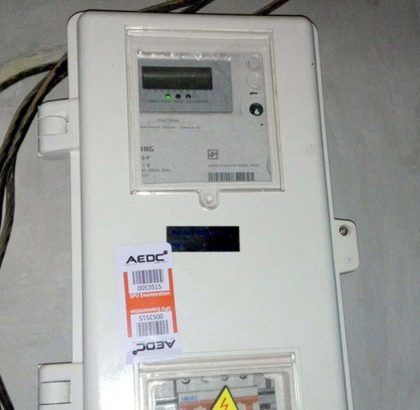 A statement by its Head, Corporate Communications, Mr. Oyebode Fadipe, said the deployment of the meters, which would begin on Aug. 8, was under the second phase of its mass metering programme.

Fadipe said the company had in the first phase of its mass metering project, installed no fewer than 150,000 meters for its customers across its coverage area.

He said the company’s aggressive deployment of meters was part of its determination to achieve 100 percent metering of its customers to engender public confidence in its billing process.

Fadipe said the installation was also to complement the Meter Asset Provider (MAP) scheme, initiated by the Nigerian Electricity Regulatory Commission (NERC) to accelerate metering of electricity consumers across the country.

He said AEDC was implementing the second phase of its mass metering project in partnership with Meron Consortium, a group comprising meter manufacturers, financiers, installers and advisory services firms.

According to him, the company is also discussing with other interested parties for the supply and installation of more quantities of meters for electricity consumers across its franchise area.

Fadipe said this development would further complement the MAP initiative.

The Managing Director, AEDC, Mr. Ernest Mupwaya, said that there were so many benefits associated with metering for both the company and its customers.

“For customers, metering gives them the assurance of fair, transparent and accurate billing and also serves as a useful tool for them to manage their consumption and costs.

“To AEDC, metering equips us with intelligent data to ascertain areas of energy/revenue leakages which will strengthen our commercial vigilance activities to plug such leakages and improve our revenue collection,” he said.

According to him, metering represents one of the key areas of the company’s strategic transformation programme, geared towards aggressively reducing its average technical, commercial and collection (ATC&C) losses.

He said that the metering was also designed to enhance the companies’ capabilities for exceptional service delivery and growth.

The Group Managing Director of Meron Consortium, Mr. Emmanuel Ndubuisi, assured AEDC management of timely delivery and installation of the meters in line with the terms of contract with the company. (NAN)