Gov. Ayodele Fayose said on Tuesday said that all the ongoing capital projects will be completed and inaugurated before vacating office on Oct. 16.

The News Agency of Nigeria, (NAN) reports that the governor, made the promise while speaking at 2018 edition of the Annual Udiroko Festival in Ado Ekiti, the state capital. 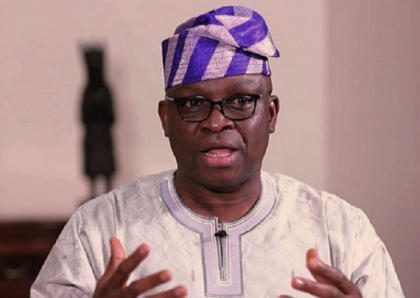 The governor said he had resolved to complete all ongoing projects in consonance with his promise while being sworn-in for a second term in office not to abandon any project embarked upon.

According to him, his critics who were allegedly saying he embarked on employment of new hands into the state public service at the tail end of his tenure should also have asked him not to continue with projects he started.

He listed the capital projects so far completed and ongoing to include the One-Kilometre overhead bridge in Ado Ekiti, the new state High Court complex, the new Governor’s office and the new Ministry of Finance complex.

He listed others to include the new Ultra-Modern Kings Market in Ado Ekiti and the Amphi Theatre, the Banquet Hall at the Ewi’s palace and the dualization of virtually all the 16 Local Goverment Headquarters among others.

NAN reports that he had, at about 3:00p.m arrived the venue into the waiting hands of cheering crowd of residents singing his praises.

Fayose said there was no known law in the country that says a sitting governor must stop performing the functions attached to his office once his party  have election decided against it.

He told the gathering that the about 200- lock up shops at the new Kings market would be shared to willing traders before the end of the week.

He pledged that those traders initially displaced as a result of the fire incident that razed the old market would be given preferential treatment.

NAN reports that the governor appreciated the people of Ado Ekiti for standing by his party during the last governorship poll, regretting, however, that certain forces allegedly did not allow their votes to count.

He assured them that the ruling party in the state led him would use all normal and legal means to reclaim the stolen mandate.

In his response, the Ewi of Ado Ekiti, Oba Adeyemo Adejugbe thanked the governor for what he termed as “sudden turn around” of the state capital, saying close to 80 per cent of the projects carried out by Fayose during his second term in office were concentrated in Ado Ekiti, thereby making his reign memorable.

Also speaking, legal luminary and founder of Afe Babalola Universiyy, Chief Afe Babalola, who is also a leading son of the ancient city, expressed delight at the volume of the people that trooped out to celebrate the festival.

Earlier in a welcome address, the Chairman , National Caretaker Committee of the Ado Ekiti Progressive Union, Chief Bayo Ogunmodimu said the Udiroko Festival marked the begininig of another traditional year for the sons and daughters of Ado Ekiti.

He said that it was also being used as a rallying point and unifying factor for all age groups and all local associations and clubs in the town.

He thanked the state government for the modern strucures erected in the palace and wished the outgoing governor well in his future endeavours.(NAN)