The Federal Government has urged Organised Labour to accept the new minimum wage proposal, considering the capacity and ability of the government and the private sector to pay. 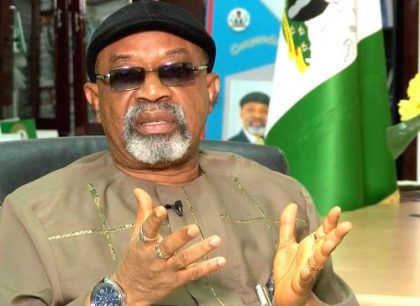 Minister of Labour and Employment, Sen. Chris Ngige, made the call when he received the new Director-General of Nigeria Employers Consultative Association (NECA), Mr. Timothy Olawale, on a visit to his office on Friday in Abuja.

Ngige had a few days ago, while labour leaders were threatening to call out workers on a full strike over the minimum wage issue, announced that the Federal Government had offered N24, 000 to the workers.

But, the workers’ leaders countered, saying that N30, 000 was the amount agreed on by the tripartite-partner committee saddled with the responsibility.

The minister told the NECA DG that it was imperative for organised labour to accept the proposed figure instead of the N30, 000 in line with social dialogue and the overall interest of the nation.

He appealed to NECA to weigh its influence on the organisers labour to accede to the new wage offer mutually agreeable to all the social partners.

According to him, Nigeria cannot afford rounds of labour crisis in this country, so it is imperative for organised labour to accept the new national minimum wage figure.

“We need to arrive at a figure which the employers can afford to pay as an employee cannot fix a figure for the employer.

“Rather, it must be based on collective bargaining and mutual agreement by the tripartite partners.

“It is not a function of moving motions or voting at the National Tripartite Negotiation Committee to insist that the figure must be as the organised labour appears to make it look.

“There is, therefore, absolutely no need to heat up the polity,” he said.

He noted that the government’s proposed new wage was based on critical facts and indices incapable of causing disequilibrium in the economy or upturning the national social order.

The minister further charged the new NECA boss to exceed the impressive record of his predecessor, reminding him that he had “enormous task ahead of you’’.

“The need for the establishment of more NECA offices across the country cannot be over-emphasised so that more employers’ associations can register with you.

Ngige urged NECA to ensure that private sector employers who were its members and those not yet registered but were defaulting in payment of the existing national minimum wage of N18, 000 complied with the law.

He also commended the efforts of the immediate past D G of the association, Mr. Olusegun Oshinowo, for contributing immensely to industrial peace and harmony in the private sector.

He lauded him for ensuring that Nigeria was brought back to the Governing Board of the International Labour Organisation (ILO)’s employer section.

Earlier, Oshinowo had said that his successor was the best man to take over the mantle of the leadership of the association.

He noted that since the formation of the group, a DG was for the first time sourced from the organisation.

Oshinowo commended the minister for his open-door policy in spite of opposing positions they had had on issues in the past.
On his part, Olawale, also lauded Ngige for the privilege of the visit and promised to live up to expectation. (NAN)